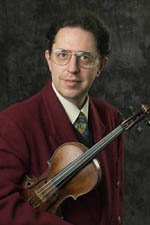 Serban Lupu: as a foreign violinist living in the United States, I have the mission to spread the values of Romanian culture

Monday, 9 February 2009 , ora 12.03
A disk comprising compositions by George Enescu was launched in the United States of America, in February 2009. Violinist Serban Lupu, an enthusiastic promoter of Romanian culture, was actively involved in the recording process, together with the Romanian Cultural Institute, Albany Records and the University of Illinois.


Which was the cornerstone of this partnership among you, the Romanian Cultural Institute, Albany Records and the University of Illinois?

My desire to record the orchestrated version of Enescu's Impressions d'enfance, pour violon et piano was the cornerstone. Initially, the piece was written for violin and piano, while Theodor Grigoriu handled the transcription, adjusting it for violin and orchestra. To this piece, which is one of Enescu's late compositions, I added two representative works from the same period: the Symphonie de chambre, which was his last work and the Piano Quartet No. 2, op. 30. It was all recorded on campus, at the University of Illinois, together with the Simfonia da Camera Orchestra.


You're an enthusiastic promoter of Enescu's works, both in the United States of America and abroad. Do you consider that it is your duty to attract the public attention to the values of Romanian culture or do you do that out of passion for George Enescu's music?

Both. I grew up with George Enescu's music. I'm telling you from the bottom of my heart that it is a music which I enjoy sharing with people all over the world, as I have done for the past three decades. But, besides this aspect, I consider that I, as a foreign violinist who lives in the United States, have a mission to spread the values of Romanian culture all over the world, on any occasion. Besides Enescu, I have performed many Romanian contemporary compositions. I am pleased to announce you that I will also perform in the "George Enescu' Festival. I will perform the Concertul pentru vioara si orchestra, by Theodor Grigoriu, the one who also orchestrated Impressions d'enfance, recorded on this CD. This violin concerto was dedicated to me and ordered in America.
Petra GHERASIM
Translated by Andreea Banciu
MA Student, MTTLC, Bucharest University
Return to archived Interviews