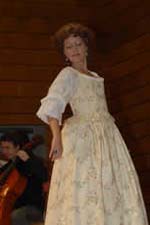 Thursday, 15 October 2009 , ora 12.07
Unanimously appreciated as producer, choreographer, professor and dancer, Mary Collins is again in Romania. After her first performance in our country in 2005, she returned every year to collaborate with the Old Music Festivals in Bucharest and Miercurea-Ciuc, as well as other events related to the artistic area of dancing.

'Calea Victoriei' Foundation organized two Rennaisance and Baroque dance workshops, performed by the British choreographer on the 14th and 15th of October 2009. In the first evening, full of energy and wit, she showed us the dances performed in the 15th and 16th century at the Royal Courts . Begining with simple steps and adding the story of every movement while performing, Mary Collins taught us the pavane and the gagliarda during the first class, while the following evening we became acquainted with the minuet, the allemande and the bourrée.

We tried to project ourselves in a nobiliary world during classes, we saw the costumes, the habits of the period, then their evolution along centuries up to the present. The ambiance was relaxed, and the participants appreciated the professor's distinction in the end. During the fourth edition of the Old Music Festival, Mary Collins will perform with Steven Player and the Bucharest band Gli studiosi di Sebastiano at the Dalles Art Galleries on the 18th of October 2009, from 7 pm.

We interviewed the artist before the first dance class began:


You have come to Romania every year since 2005. What have you experienced in our country?

I enjoy working here. When I first came here, I didn't know anyone in my field of activity, namely the research and presentation of the old music repertoire. Coming here on several occasions, I discovered the activities which took place all over the country. I was lucky enough to meet important people, I started working with the University of Music of Bucharest and some people who worked in Cluj and I have also taken part in the festival at Miercurea Ciuc. This way I found out that people were very interested in learning more. I really enjoyed it! It was very interesting observing the development of the Old Music Festival in Bucharest . I shall participate at this Festival once again this year.


What can you tell us about 'Calea Victoriei' Foundation's project and what have you prepared for the two-day workshop?

It is in fact a dream I have had for a long time, as a result of some concerts and university courses. A lot of people wanted to learn the existing repertoire, from court dances to those common dances during Rennaisance and Baroque. The Baroque dance is particullary interesting because it led to what we know today as classical ballet, although it was somewhat more accessible. Being practiced by Louis XIV and his Court, it became famous.

These classes are meant to offer a first sample of what we shall perform at the opening of the Old Music Festival in Bucharest. The concert will consist of Spanish music and dances. The interesting thing is that the central point will be the Follia dance, which has many variations written by different composers. We shall present what was happening in Spain at the end of the Rennaisance, how the blend with the Baroque was accomplished and the Follia's evolution from its origins to the most famous adaptations, such as those by Corelli or Bach.
Andreea Chiselev
Translated by Cristina Caramida and Ramona Grama
MA Students, MTTLC, Bucharest University
Return to archived Interviews