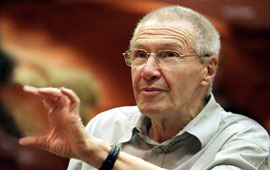 Monday, 19 October 2009 , ora 12.32
Between October 14th and 19th 2009, the composer György Kurtag was celebrated in Timisoara by a series of events. Among these, worth mentioning is the volume György Kurtag, reîntoarcere la matricea spirituala (György Kurtag, Returning to the Spiritual Matrix) by Constantin Tufan-Stan, who agreed to talk to us both about the personality of the maestro who was from the same town, and about the book itself, in an interview offered exclusively to Radio Romania Music.


How did you come up with the idea of writing a book about György Kurtag's life?

I felt the strongest impulse when I realized I was contemporary of such a great and internationally important musician. Being from the same town as maestro Kurtag, I analyzed some biographical details and I discovered interesting things about his training period in Lugoj, his first contacts with the musical life and where he started his musical studies in piano and composition.


Your book is entitled György Kurtag, Returning to the Spiritual Matrix. Could you explain us the title, in relationship to the book?

Since the moment I contacted maestro Kurtag, with the intention to know him better, I managed to make him get closer to his spiritual womb, Lugoj, Timisoara, Banat, the Romanian culture in general. The maestro thus returned to the Romanian spirituality and literature, and composed an important work, Ballad-Carols, as a tribute to our professor, Felician Brânzeu. He used for the first time the text of a carol found by Béla Bartók in 1913 in Paucinesti - Hunedoara. Starting from this reality, I considered that this title was very appropriate for the book, as we witness, indeed, a returning of György Kurtag to his spiritual matrix.


Could you give us a few 'technical' details about the volume whose author you are?

The book was first launched in Cluj and it has a foreword by maestro Francisc Laszlo. The second launch took place on the occasion of the concert which the Banatul Philharmonic in Timisoara dedicated to maestro Kurtag on 16th October. On this occasion, the instrumental performers from Timisoara also played one of the maestro's works - the ballad for viola and orchestra. It isn't a large volume, it has about 100 pages. It is an introduction to the maestro's biography, with some analytical studies, but the theme of the book in general is his biography. It is illustrated with images which I took when visiting the maestro last year, in Lugoj, after many decades.