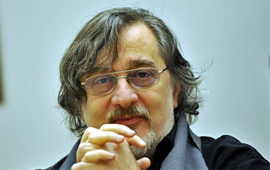 Sunday, 29 November 2009 , ora 12.44
On November 29, 2009, violinist and composer Vladimir Mendelsohn celebrated his 60th anniversary, therefore the Radio Romania Music team wished him "Happy Birthday"! The musician gave us an interview in which he told us, amongst others, about his projects in the near future.

Before we begin, we'd like to wish you "Happy Birthday"!. You are ready to step into a new decade of your life, what musical present would you like for the occasion? ?


If you were to choose between music performance and composition, which of them has been and still is the domain in which you feel more at ease?

Neither of the two. Music performance is a behavioural code which fundamentally implies a great amount of learning, of course, then the knowledge of the musical piece to perform and the ongoing battle with stress. However, there remains a little pleasure to it. And regarding composition, to my amazement, I gradually discovered that even there the quantity of things that become a barrier to you is enormous and the quantity of things you can express directly, sincerely and rapidly, is really "the second violin" as far as composition is concerned. Therefore, to conclude, I could say, yet hardly, that in composition I feel more at ease.

What are the next musical events you are involved in ?

In a few days. I have a tour in Spain, and in less than a month, if everything goes well, I have a concert in Bucharest, on the occasion of the Revolution's commemoration.
Petra Gherasim
Translated by Tone Monica Cristina and Valentina Tache
MA students, MTTLC, Bucharest University
Return to archived Interviews