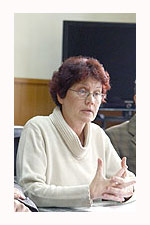 The Mozart Festival in Cluj Napoca - the 2009 Edition

Wednesday, 9 December 2009 , ora 12.47
Adriana Bera, President of the Romanian Mozart Society: This is the 19th edition and it is a little different from the previous ones because it was marked by the financial crisis we are all dealing with. This situation has forced us to give up on an essential component of the festival: this year we had to stop the series of interpretation contests, after 17 editions.

Therefore, the festival will include only two concerts.and to be in tone with what the music loving public has become used to and also with the tradition of the festival, we"ll make them symphonic ones. There will be two concerts performed on stage of the Transilvania Philharmonic. The first concert will be conducted by Mika Eichemholz and the closing one by Nicolae Moldoveanu.

The instrumentalists of these two concerts will be young clarinet player Razvan Poptean, and, for the final part, the famous American pianist and musicologist, Robert Levin. As a matter of fact, Robert Levin will be the main attraction of this edition. He will perform a conference-concert on December 9th 2009 at the Gheorghe Dima Music Academy. On Thursday, December 10th 2009 he will also give a course for our students and on December 11th he will be soloist for the closing concert.

We are fortunate that we have friends. The musicians performing at this festival are doing it only out of friendship. They receive no fees and if they happen to accept them, they are just symbolic ones. We would not have been able to provide Robert Levin with a fee he is used to, like the one for his performances in New York, Vienna or Paris. Similarly, Serban Lupu has kindly accepted to perform a recital in the festival. I will be honored to perform alongside him. The Transylvanian Quartet and the Romanian Piano Trio have included the Mozart Festival in their tour. The members of the Kostyák Ensemble, are another example, as they will come from Switzerland at their own expense and will perform free of charge, just to "save" the festival. These are impressive gestures and I hope those who attend the concerts will receive them well.
Petra Gherasim
Translated by Tugui Daniela and Mircea Filimon
MA Students, MTTLC, Bucharest University
Return to archived Interviews