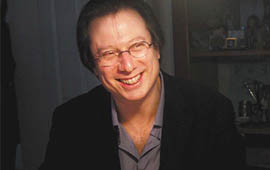 Saturday, 19 September 2009 , ora 15.13
The Chamber Concerts Series
September 19th, 17.00, The Romanian Athenaeum
Is this the first time you are performing one of Enescu's works?

Yes, this is the first time.


Have you ever listened to violin recordings by George Enescu? What were your impressions of them?

Of course. Enescu was one of the greatest violinists, professors and composer of the 20th century. Furthermore, I can say that I know his language because a very good friend of mine, who had a great influence on me, wonderful violinist Ivry Gitlis studied alongside him, during his childhood. That is why I feel that I understand Enescu's way of making music as well as his importance in the context of the 20th century.

You chose to perform his two Intermezzi. What is your opinion about these works?

They are typical for Enescu's language, for its poetics, and, to me, they represent a wonderful way of perusing George Enescu's creation for the first time.


How did David Stern fall in love with music and how did he get the wish to build a career in music?

Once you grow up around music, you cannot forget it. In my childhood, I was surrounded by music and it became a very good friend of mine. Music is like a lover. Once you have fallen in love with it, you can never leave it. It is a love relationship which lasts a lifetime.

What was the role of your father's (Isaac Stern) remarkable personality in the decision to follow this path?

My father wanted me to love music, but not necessarily in order to become a musician. Although he did not force us into this, both my brother and I have become conductors because we love music and we both want to approach it in our own manner. I left America and I have found my own path conducting opera, baroque music using old instruments, or classical music. These are worlds of sound very different from those of my father's. I have found my own voice and a beautiful career in Europe.

What was the best advice you have received from your father?

Never stop thinking. When you are on stage, you can allow yourself to be swept away by the dream of music, but you should never stop thinking. It is the most important lesson that I have learned from him. We feel music in a certain way and we wish to express ourselves. If we lose our sense of direction while we are on stage, we cannot perform it as well as we ought to.

Is there a certain point in the career of violinist Isaac Stern which you would also like to reach?

My father did not have a career; he had a certain moment in history. He was one of the greatest musicians of the 20th century. I will always aspire to this level, and I hope to reach it, I will never stop wanting to go higher and higher, to reach his level of proficiency. It is wonderful for me to take on this challenge and I will always allow myself to be challenged.


Have you ever performed alongside Maria Joăo Pires?

I know her very well, but we have never performed together before. I have admired her many times, we have tried to schedule our concerts together, but this will be the first time we actually do it. She is a great friend and a great colleague. She also performs chamber music at the highest level and I especially appreciate that about her. And when she performs with the orchestra, it is like she is performing chamber music with the ensemble. And the Basel Orchestra is indeed a chamber ensemble, different from others. Every member of the Orchestra listens as if they were performing chamber music and they are more involved than the instrumentalists of other ensembles. I have an absolutely unique artistic bond with them and I consider it to be one of the most remarkable and most interesting orchestras in Europe nowadays.


As conductor, do you have certain preferences regarding the soloists with whom you perform?

Many of them are my friends, so it is difficult for me to name them. I have already mentioned Ivry Gitlis, who is also one of the greatest violinists of the 20th century; I also like to work with Andreas Staier, who is a master of the piano forte and the harpsichord. I appreciate many other musicians, with whom it gives me great pleasure to work in very different repertoires. Every time we see each other it is as if you meet an old friend, we relive certain musical moments and that is very important.


Have you ever worked with Romanian musicians?

There are many Romanian instrumentalists in my orchestra from St. Gallen and in Paris too. But the individual who has had a great impact over me as a child was Dinu Lipatti, through his recordings. From my point of view, his recordings are some of the best that have ever existed. His way of performing so elegantly and so musically was a wonderful lesson for me.


You are interested in music performed on old instruments, baroque music and classical music, performed especially alongside the Fuoco Opera. Which do you consider to be your most important achievements in this field, up to now?

Two years ago, I established the Fuoco Opera Company to perform operas and a generally lyrical repertoire. I have performed at the Concertgebouw in Amsterdam, at the Festival in Lucerne, at the Champs Elysées Theatre in Paris, and in many other extraordinary places, alongside wonderful soloists, such as Paul Agnew, Lisa Larsson and other important names from the baroque music field. But what is most important for me is that two years ago I established a group of young singers in Paris, whom I have helped learn a repertoire and work on developing their voices. I have done wonderful things with these young artists, I have seen how they became better and stronger, how many of them started building beautiful careers, after they finished their collaboration with the Fuoco Opera. For me this is more important than the concerts I have held with the great names in the music field.


You travel a lot in many countries. Sometimes you lead opera shows, other times symphonic concerts. How many events do you have scheduled every year and how do you manage to deal with such a full agenda?

It is a very good question. I do not know how I manage and I do not even manage to count them. Because I conduct many opera shows, I must also have many rehearsals. It is hard to maintain a balance between my activity in Switzerland, in the St. Gallen Opera, and the one in Israel, at the Opera in Tel Aviv, where I am also a music director, and the one in Paris, the Fuoco Opera. I do not even have a full free week in the next season. What I mean to say is that when I am in one place, I must also think of what happens in the other places and that is not easy. It is similar to the situation when you drive a car, you always look ahead, but you must also pay attention to what is going on your left and on your right. If you look in one direction, you will not succeed. You must have a perspective as thorough as possible and keep your mind positive because otherwise everything becomes very, very difficult.


At the end of our conversation, is there a message you would like to address the Romanian audience?

In my childhood, I came to Bucharest a few times with my father. I was just a tourist because I was accompanying my father in his tours. Bucharest had always been a special place for him and he was very happy to perform there. This will be my first concert in Bucharest and I am anxious to come, not only because it is a beautiful place, but it also has a rich history and a rich cultural tradition. I will be very proud to be there and I hope that my father will watch me from Heaven and will salute me that day.
Monica Isaacescu
Translated by Martin Potter and Elena Gheorghe
MA Students, MTTLC, Bucharest University
Return to archived Interviews