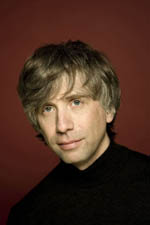 
The programme we are presenting this evening, which is also available on disk, is based upon these two vocal musical pieces: Il pianto della Madonna by Claudio Monteverdi and Il pianto di Maria by Ferrandini. Nowadays, Ferrandini is a virtually unknown composer. But in his day he was a very important Italian composer, who lived in Germany. Thus we put together these two compositions and another series of instrumental musical pieces with the same particularity, such as the Symphony and the Sonata Al Santo Sepolcro by Antonio Vivaldi.

The theme of the programme is The Passions of Christ described through the eyes of The Virgin Mary . At the same time, the pattern of the instrumental musical pieces is quite melancholic and sometime extremely dramatic. At the end, The Virgin Mary is depicted as a mortal in these compositions; the one who sees her son through the eyes of a mortal. We perceive her mortal side manifesting itself when her son dies on the cross. All in all, we have a highly dramatic programme.

The performance will take place without a break so that we will be able to create the scene of a sacred play, a sacred theatrical night. The audience will also listen to some compositions they have probably never heard before, even though these musical pieces are small masterpieces.
Veronica Orha Canelea
Translated by Andreea Tanase and Mircea Filimon
MA Students, MTTLC, Bucharest University
Return to archived Interviews