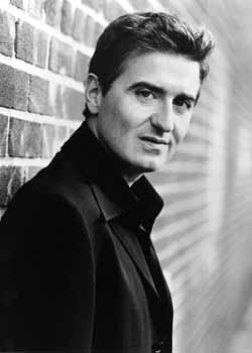 
Why Liszt on the poster advertising the concert in Bucharest? Were the virtuosity and spectacular nature of this score the criteria in making the choice?

I have always enjoyed performing this concerto by Liszt. However, it is hard to say that I was the one to have chosen it, because making such a selection is always about orchestra, conductor and soloist working together. I have not especially requested this opus; I have submitted a list of concertos-just like I do every year-and they have chosen this Liszt concerto, as appropriate for the nature of the festival, of course.

Naturally, I am delighted to play Liszt, as he is one of the composers I admire so much and who, I think, is not fully appreciated as a great creator-serious and profound-but rather considered in terms of his image as a virtuoso, which is somewhat of a superficial approach... Liszt is an extraordinary composer and his second concerto is the one that especially shows it: there is much bravery and virtuosity here as well, and lots of elements of technique, but there is also an enormous amount of poetry, and depth; it is a concerto which I think is truly extraordinary.


Could it be that it is more dramatic than the first concerto?

Yes... I would say that the first one is a little more focused on virtuosity, which can sometimes seem more superficial, having a slightly 'military' resonance at times, but it does have its poetic moments... However, there is a drama in the second one! Its structure is extremely modern, as-unlike the concertos dating from the same period-it does not have the three typical movements, being a piece perfomed with no pause from the beginning to the end; moreover, all its parts are connected: there is a leitmotif that appears at the beginning, as a living cell that develops as the piece unfolds. Liszt's imagination in achieving this is extraordinary, as well as his approach to it�

On the other hand, there is an extraordinary participation and cooperation between the solo piano and the orchestra! It is about more than just an accompanying ensemble; there are several moments (such as the wonderful duo piano-first cello in the central part of the piece) when it can be said that it is a chamber piece. There are quite a few sections offering solo parts to the members of the ensemble.


It has often been said that Liszt was the one to have added orchestral dimensions to the piano...

Liszt is very 'orchestral' indeed, and so is Schumann (whom I consider to be a very 'orchestral' composer), but Liszt may have illustrated this even more through his solo piano compositions (as there is no ensemble in this case). Yet, what I believe to be truly special about him is the development of the piano technical capacities. One may realize that Liszt was a truly unique pianist just by looking at his scores-after all, he was not named the 'Paganini of the piano' for nothing. He raised the extent of his instrument's capacities to a new level-that had not been attained previously-which was also reflected in the numerous orchestral scores that he arranged for piano. Think of the Symphonie Fantastique by Berlioz or the symphonies by Beethoven which he played himself on the piano. His talent of suggesting and synthesizing the orchestral 'mass' on the piano was extremely special, being considered a great challenge during that époque.


There are many French composers and modern composers in your discography, as well as authors of the past few decades.

I have always tried to expand my repertoire in various directions, as I am a very curious person and I need to look for such differentiations... On the other hand, I am half French, half German (on my mother's side) and I feel especially drawn (at least thus far in my career) to two main periods of piano repertoire: the romantic period-the great romantic piano literature-including Chopin, Liszt, Rachmaninoff, Brahms, Schumann (a long and-because of its romantic nature-extraordinary époque) and the French period in which I am very interested: Debussy, Ravel-extraordinary composers...


You have also recorded Satie and Messiaen...

Yes, I believe the contribution to the enhancement of the repertoire is also important: I have given a first performance in the United States of several concertos composed especially for me, while James Mc Millan promised me a concerto for next year. ...I have indeed performed lots of musical pieces by Messiaen; besides, I knew him very well... Although it is not exactly a priority in my life, I find it very important that I should ask a composer that I am inspired and moved by-one that 'says something to me'-to compose something for me; this can be very important for the future! On the other hand, my repertoire focuses on romantic and French composers for now, until-let's say-around the turn of the century...


Your discography is extremely varied, including film soundtracks as well...

Yes, of course, just as I also recorded jazz albums because I love jazz and I wanted to pay a tribute to the two great jazz musicians that I have especially admired-Bill Evans (an extraordinary pianist) and Duke Ellington (a great composer of the 20th century). These two jazz albums I have recorded were a very interesting experience for me, one that truly enriched my life.

It is true, I do take part in film soundtrack creation quite often; as I live in Los Angeles-where my main residence is-I have evolved in this environment for a while and got to know the people in this field for quite a few years and I can say that this artistic dimension has almost started to be part of my life. Moreover, I find that being interested in composing film soundtracks offers a musician the opportunity to instantly reach an impressive audience: millions and millions of people. This is what we really need in the world of classical music today, especially in order to attract young people, as well as those who are not familiar with classical music and those who have not had the chance to know such music through education, either in their families or at school...

Naturally, when you compose film soundtracks, you also have a chance to impress those who go to the cinema but not necessarily to the concerts of their home town philharmonic orchestra. There is a difference! People would very often come to me after my concerts and tell me they had not been to any of my concerts before, nor had they ever been to a classical music concert, but that 'we found out about you through the film Pride and Prejudice (for example), we bought that disk and we loved it, so we've come to listen to you play as well!' I find this absolutely amazing!


You approached opera as well, and not only through the album Aria: Opera without Words...

Opera is another story. I love opera-I am fascinated by human voice! As far as I am concerned, human voice is the most extraordinary instrument; actually, it is the only true instrument, as it produces sounds naturally and directly, while its repertoire is remarkable-from opera overtures to lieder literature (pieces that I truly adore!). Every now and then I had the chance to accompany great singers-remarkable musicians such as Cecilia Bartoli, Renée Fleming, Angelika Kirchschlager, which I liked very much, even though I cannot sing (I do not have a singing voice, I sing totally out of tune and I have no talent for it).

So the only way of getting close to this repertoire is through the piano, obviously by transcription. That is through opera arrangements. And a large part of these was done by Liszt, as it was fashionable for most of the great pianists to make transcriptions of opera and everything else in the 19th century... They would always end their concerts and recitals with a number of transcriptions they had arranged themselves, based on themes they had chosen themselves as well! Although this practice was fashionable at the time, it is rarely met nowadays.

Back to this album-it was extremely nice to have the opportunity to play the music that I love so much-the music that I adore-on the piano; because of this music, I was delighted and amazed that the pianists of the 19th century would create their own transcriptions based on pieces by various composers. I have compiled transcriptions made by great performers other than Liszt on the album that you mentioned (as I have gathered my favourite transcriptions from Liszt's pieces on another album a while ago); it includes very little known transcriptions-it is a selection based on my personal preferences, to which I have taken the liberty of adding two, three I created myself, in an attempt to revive that tradition and show that it continues to be a very interesting thing to a performer.


Could it be said that you toyed with a certain side of composition as well?

Perhaps, but not quite composing-I would rather say arranging; I would never dare to prove that I have talent as a composer, but as an arranger-yes! Arranging or improvising is one thing; composing-if we consider the actual meaning of the word-is something else!


Do you make your own cadences for the concertos you play?

I have already done that quite a number of times, for most concertos by Mozart which are included in my repertoire (although I do not play that many). I made my own cadences about twenty years ago for the three or four Mozart concertos in my repertoire that did not have cadences. I was doing it out of passion, as early as that time.


You have always been willing to experiment...

I have always been very curious about everything in life, in general, not just music, and this character trait was very important to me.


In Bucharest, you collaborate with the Orchestre de la Suisse Romande...

It is an orchestra that I appreciate very much; my relationship with them, which is wonderful, has grown in time. We recently went on an extended tour together: we left from Geneve-the orchestra's 'home town', then, we went to Germany, South America (Argentina, Brasil, Uruguay)... a series of concerts with maestro Marek Janowski. It was amazing!

It is an orchestra that is very dear to me because-apart from its musical appearance (it is a wonderful symphonic ensemble-think of its extraordinary history, including the experience of the great conductors that have 'cradled' it, so to speak)-it is an internationally renowned orchestra, an ensemble having a good internal cooperation-which is very important: they are nice, willing to create high quality music together, while each of them is giving their best. It is one of the most agreeable orchestras I have worked with and it is a great pleasure playing with them.
Anca Ioana Andriescu
Translated by Silvia Bratu
MA Student, MTTLC, Bucharest University
Return to archived Interviews