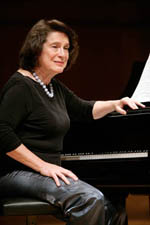 You are back in Bucharest, on the stage of the "George Enescu" International Festival, where, forty-five years ago you were awarded the First Prize of the International Piano Competition. Do you remember the starting moment of your career? What did that award mean to you?

My memories of those times are very dear to me and my relationship with this city is a very sentimental one; it was indeed my first success, my first real international success, on a stage outside Russia and the former Soviet Union. The city is absolutely astonishing, the audience is wonderful. I have the most pleasant recollections... I was eighteen at the time and it is obvious what recollections last in an artist's soul at that age.


Do you remember having performed some of George Enescu's works that time?

Not that time, no. But in those times I enjoyed Enescu's Sonate pour piano et violon no. 1 very much and I used to perform it with immense joy. I am back on the stage of the "George Enescu" International Festival and for the first time I am going to perform this work.


What is your opinion about the music of this Romanian composer?

I have the most diverse opinions. George Enescu's music is diverse. If we talk either about his opera or about his compositions for piano or violin, everything is different. The Sonate is a unique composition; in my opinion, we can even conceive a scheme or we can find specific names for the emotional state present in each part of the Sonate. The first part is deep meditation, a drama; it can even be a tragedy in a certain sense. I would call the second part "Sommernacht Traum", which means "A Midsummer Night's Dream", at least this is how I picture this scherzo. The third part is of course melancholy, a pure nocturnal state.


Personalities such as Nadia Boulanger or Arthur Rubinstein were in the jury of the "George Enescu" International Festival in 1964. Did you happen to meet these great pianists face to face?

As far as Nadia Boulanger is concerned, I honestly do not remember her having talked to us, but Arthur Rubinstein was there for the third stage and I remember him very well because he was extremely sociable, nice and friendly. He spoke eight foreign languages and that impressed me very much; he was a brilliant man, an amazing interlocutor. We met at the Athenaeum, if I remember well the name of the hall where important concerts are still held, and we talked. It was a magnificent experience.


At the beginning of your career you were also prize-winner of other important competitions such as "Marguerite Long" or "Queen Elisabeth". Do you find awards important for an artist who is about to start his/her career?

Even if there are a lot of question marks, I would say that these competitions are essential from the perspective of the fact that they give you the chance to perform, to display your skills on a big stage. And if you have good luck and you happen to win awards, opportunities to be invited to different concerts arise. On the other hand, if you happen to lose or have a nervous breakdown, this has a strong impact on you - it is a big psychological drama for any young musician. And then you have to work a lot with your inner self in order to overcome this obstacle.


In 2003, at The Vendome Prize you offered a special award to a Romanian pianist, Matei Varga. Do you usually support the representatives of the new generation? Do you enjoy sharing your experience?

Of course, I can say that I simply adore doing it. As far as the jury is concerned, I am not usually part of the jury; that time was the only exception. It is a special competition and, indeed, mister Alex Gregory personally helps all these young musicians who win his competition, he takes care that they have good concerts after the event. It is very special. I have always said that I cannot be member of the jury; I am a friend of the contestants and, if they ever happen to need my help, let them come to me and ask for advice. It will be my pleasure to help them and I really do not enjoy being member of the jury. I really liked the young Romanian pianist Matei Varga, I liked his performance very much and because it often happens that some people do not get any awards, I simply offered him my pay, let�s say as a promotion award from my part.


A French musical critic (André Boucourechliev) compared you to Dinu Lipatti in an article from the Diapason Magazine ("Leonskaja's way is a way of peaks. By self exceeding, exigence, passion and intelligence, she ranks among the best, not only among her contemporaries, but also in the century: at the level of Clara Haskil, Lipatti, and also among the modern artists."). Do you find yourself in this comparison to Dinu Lipatti?

You have held several concerts and recitals in Bucharest, together with the National Radio Orchestra, the "George Enescu", Philharmonic Orchestra and choir-master Horia Andreescu. Have you formed an opinion about the Romanian music life?

Yes, I have. I have formed an opinion; to be more precise, I am perfectly aware of the perception of the Romanian audience, both during the season and during the festival. During the festival, the Romanian audience represents a unique experience to me, both when I am on stage and in the hall, where there are five thousand people and you do not have the slightest feeling that someone is in excess. My feeling is that they listen to the music both with the heart and the mind, i.e. deeply. It is a wonderful thing. I have a very good opinion about the Romanian audience, about Romanian musicians. It is a musical nation.


Your musical development was influenced by your meeting with the great pianist Sviatoslav Richter. What exactly impressed you about this musician's personality?

On the one hand, it is easy to put into words; on the other hand, it is practically impossible to do that. When you are a young artist who is about to build a strong career, very self-confident, but at the same time you have complexes because you realize that you can do nothing for the time being, and s uddenly you have the chance to be, for a long period of time, next to such a great master, and you feel both his simplicity and his greatness, you picture new ways of how everything should be done.


You will be performing works by Ravel, Enescu, Debussy and Chopin in Bucharest: Impressionist and Romantic music, a repertoire representative of you. If you were to give a name to this recital, what would that name be?