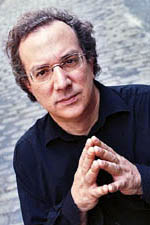 I have read about your activity and I was impressed by the surprising combination of jazz improvisation and classical music that you manage. Tell me about how you have got here.

Ever since childhood, I've wanted to be a jazz pianist. At about 12, I already knew to play the piano; it was then that I met a teacher from France, in Philadelphia, where I was living, who encouraged me to study classical music, even if only to improve my instrumental technique. From then on, I began practicing various music genres, but I was especially interested in jazz. I used to listen to a lot of classical music, as well as rock, funk and electronic. Starting with this interest in several genres, I discovered a way of improvising starting from classical music. Beginning with Mahler's or Goldberg's variations, I wanted to offer musicians who improvise, and who love classical music at the same time, a new challenge, a means of improvising on new structures.


Have you found, in the history of music, a genre closer to jazz?

For most musicians, baroque is the closest to jazz because of the "walking bass", a melodic-harmonic core, which was used to improvise, just like in jazz. Yet, I believe that the real idea of jazz is to take an already existing theme - it could be a pop or folk song or another musical theme - and develop and modify it through improvisation. While I was young, modern music (Bartok, Stravinsky, Schoenberg) was a source of inspiration to me, but I was also later inspired by Beethoven, Chopin, Schumann and Wagner. I was interested in discovering the structure of the works of these composers.


What structure are you referring to - only the harmonic one or to the entire structure of the songs: harmony, melody, and rhythm?

Naturally, to all of them, but I was particularly interested in musical forms and the way in which the works had been adapted for orchestra. I strived to understand what had happened in the history of music, the influences and the sequence of events. I was interested in various aspects of music, and I still am, just like many other musicians, because this is a area where one can learn continuously. The history of music is so rich, and it is so lovely to compose and perform music, that I could not do anything else.

Could you name the composer who has inspired you the most in your jazz adaptations?

I could not limit myself to only one of them. For instance, I am interested in finding out how Stravinsky covered different musical genres and transformed them. As I evolved from a musical viewpoint, I became more interested in jazz musicians like Miles Davis, John Coltrane, Herbie Hancock, and McCoy Tyner.


I know you played, some very many years ago, in a jazz festival in Bucharest.


What memories do you have from that period?

Well, I came to Romania after the fall of Ceausescu. Back then, there were very interesting times, which I experienced with the greatest emotion, and I think that many were eagerly expecting a change in Romanian society. I did not come with the group I lead, but I performed with Sam River, the saxophone player's band. Definitely it was an interesting experience and I'm looking forward to coming back to Romania, to perform.