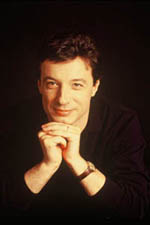 
Welcome to the most important festival dedicated to Romanian classical music! On September 13th, you will be conducting the famous 'Maggio Musicale Fiorentino' Orchestra, one of the most valuable Italian ensembles of the genre. First of all, may I ask you what your expectations are regarding this concert and regarding the Romanian public?

I know that the Enescu Festival is very famous and it is a very prestigious international event. I also know that Romania has a high class cultural and musical life. I've met many Romanian musicians along the years and I have always discovered very well trained people and excellent musicians! So my expectations are to find an extremely elevated audience, fit for such an important festival.


The programme of the concert includes Enescu's Symphony no. 2 and Gustav Mahler's Symphony no.1. Enescu created his three finished symphonies before the end of the First World War. It was an effervescent period, which was fascinating from the point of view of composing -a time when the great European classical tradition was being challenged by the rising of countless revolutionary tendencies. Since your affinity for contemporary compositions is so well-known, how would you describe Enescu's Symphony no.2 from this point of view?

Symphony no.2 was created between 1912 and 1914, so it was before the First World War. Enescu was a great personality of the international music arena, the author of some complex works, in the context of which Symphony no. 2 remains one of the most elaborate creations the artist has ever signed. It is conceived for a very ample orchestra, in an eclectic style, influenced by the Munich and French Schools, but which evokes an atmosphere, a note, countless colours of his native country.

The most important and the most difficult thing for a conductor when it comes to such a symphony is to be able to control all the themes of the work, six themes which have a cyclic repetition. Their exposure begins right in the opening and evolves along the whole symphony. More themes are presented during the first part than in all the other parts, the first of them being extremely ample -which is, in fact, typical for Enescu's quality, whose themes convey a certain feeling at first presentation, but, as the music evolves and transforms, become subject to some sort of metamorphosis, so that they create new themes along the exposition.

During the first part, I find the second thematic group of the exposition to be very original, as it evokes the colour and the ethos of musical Romanian folklore -which is truly beautiful! As a whole, the symphony is fantastic and, I repeat, extremely complex.


When was your first contact with Enescu's music? In your opinion, what place does he deserve in the context of the 20th century composition and which of the characteristics of his style do you mostly appreciate?

Enescu's music is a very accurately representative of his age, it is cosmopolite and, as I have said earlier, it assimilates the Romanian musical folklore in a high class universal language, with influences from the Munich School -the school connected to Richard Strauss but also, for example, to Hans Pfitzner or Walter Braunfels, who became known before the First World War and in the interwar period. But what is most interesting is the French influence for which, in my own opinion, Enescu owes credit to his years of study in Paris. I mentioned that, along the years, I have met many Romanian musicians; there are instrument players in your country who perform all over the world. From all of them I know how wonderful and fantastic Enescu's music is. In particular, a friend of mine, violinist Eugen Sârbu, familiarised me with the art of the great composer some time ago, about 25 years ago, I think.


Have you conducted or even studied any other works by George Enescu so far? Are you perhaps familiar with the opera Oedipe, his lyrical masterpiece?

I must confess that I have not yet conducted Enescu's works, so this will be my first experience as conductor of Enescu. But I have covered and studied some of his works -for example, I want to mention the wonderful opera Oedipe, which I also saw a couple of years ago, performed for the first time in Italy, in Cagliari; so I asked for the score, because Oedipe is truly a great opera.


How would you describe this evening's programme? I suggest you imagine being a director, a director of its interior architecture, of its imagined scenario.

The programme is clearly articulated around Enescu and the idea of composers who lived in the cultural climate of his time. Obviously, Mahler is different in many ways, his path was different from Enescu's, but they share a lot in common, too, such as their affinity for this Viennese, Southern German style. I am delighted to perform Enescu's Symphony no. 2 because it is a major work, probably not very often performed, and the reasons relate to the difficulty of the work, of how hard it is for the orchestra, for the instrument players, as well as all Mahler's symphonies, which are, also, extremely complex; but the difference is that the latter are more often on concert billboards, they are a part of the current repertoire, and Enescu's music outside Romania is not so popular yet.


Is the Gustav Mahler's Symphony no.1 your choice for the programme of the evening? Is Mahler one of your favourite composers?

Enescu's Symphony no. 2 was the choice of the organisers of the George Enescu Festival and Mahler's Symphony no. 1 appeared following a common idea, which I suggested to the artistic manager of the 'Maggio Musicale Fiorentino' Orchestra, maestro Paolo Arcá. We both reached the conclusion that this is a good match for Enescu's work. We introduced the programme concept in Bucharest, and the people responsible of the George Enescu Festival loved it very much.


Symphony no. 1 is, without a doubt, one of Mahler's most famous works, a profoundly romantic and overwhelming musical construction. What is Roberto Abbado's vision of this work?

This is the beginning of a long journey that Gustav Mahler embarked on with this work. The opening of the symphony is very original, by comparison to everything that was composed before Mahler. The A note beginning explodes at the chord instruments in an ambitus of five octaves. A unique but completely artificial atmosphere is generated. Over this artificial sound, we hear natural sounds: birds, trumpet fanfares, horn fanfares but which are performed by clarinets - an apparent mistake. It is the beginning of a new way of imagining a symphony, of conceiving the sonority of a symphonic ensemble. So we are dealing with a work which has a double meaning: the connection with everything that preceded it, not just in terms of classical music, but in terms of music in general, and, obviously, the commitment to the future. Mahler had some sort of a telescope with which he was able to look at what would be...

His personal life, his intimate world were also important as were his childhood and the songs of his childhood -and the third part of the Symphony no.1 remains an example of funeral march based on traditional music, the theme being a song from children's folklore. Again, we have a very complex work, different from Enescu's, but, at the same time, related to it from some points of view.


Let us talk about the 'Maggio Musicale Fiorentino' Orchestra as well, the ensemble which is performing under your baton for this concert. What qualities made this band unique and, at the same time, representative for the Italian space?

The orchestra has a very long tradition, it is an ensemble with which I have constantly and frequently worked since the beginning of the 1990s. I love them - they are wonderful musicians, who make up a virtuosic band, who sing with a particular Latin passion and, at the same time, with complete accuracy, so that the details are granted dutiful importance. But I am always pleasantly surprised by how flexibly and fast the members of this ensemble respond to the conductor's intentions.

I have had many achievements with the 'Maggio Musicale Fiorentino' Orchestra in Florence -symphonic concerts as well as opera. The last concert in their company was in mid-March 2009, with an interesting and not very ordinary programme -Mahler, Adagio of Symphony no.10, Mozart's Symphony no. 39, and then, during the second part, the Nelson Mass by Haydn. We also performed early works of Verdi -Attila and The Lombards ... The last opera for which I worked with them was one year ago -the Italian premiere of Phaedra by Hans Werner Henze, a wonderful lyrical work for small orchestra, which was recently granted the Abbiati Award.


A high prestige award in Italy...

Yes, it is the award of Italy's National Music Critics Association, who all vote for presenting this award -they are around 100, 150; I have also received the Abbiati Award for conducting in 2008 and one of the reasons was actually the Phaedra performance which I conducted.
Larisa Clempus
Translated by Silvia Bratu
MA Student, MTTLC, Bucharest University
Return to archived Interviews