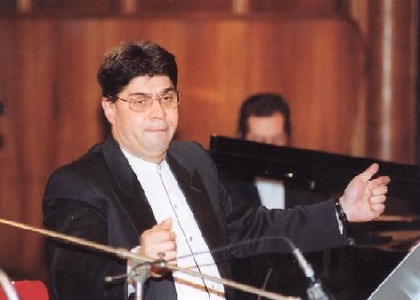 The Radio Big Band will play in concert Friday, December 22nd 2017, as part of the Radio Musical Season. Under the title "Winter Stories", the ensemble directed by Ionel Tudor will have Paula Seling as their guest. The concert begins at 19:00 on the stage of the "Mihail Jora" Studio and can be heard live at Radio Romania Music. Conductor Ionel Tudor gave us more details:

Maestro Ionel Tudor, you perform special concerts on the stage of the Radio Hall with Paula Seling as your guest. How did the idea for these events come about?

This autumn I met with Răzvan Suma and suggested this carol concert, where the Big Band was to be joined on stage by the Chamber Orchestra and accompanied vocally by Paula Seling. She has special and wonderful carols, very moving, they touch the soul of the listeners. I really wished for this concert to happen. Suma agreed, we got in touch with Paula Seling and from what I hear - I don't know for sure - we will also be celebrating 20 years in Paula Seling's career. The Radio Hall will be in full celebration.

Who signs the arrangements for the carols?

So we can expect special sonorities.

Yes. It is a mix between pop and symphonic music and we also have works more on the layman's side of things. All of them are beautiful. People who are interested should come and listen, it is a unique concert.

We have to perform up until the 29th of December and this year we hope to finally be able to celebrate New Year's Eve in the family. We've had a very, very rich schedule. On the 29th we'll finish. So, we've recently had these two concerts with Paula Seling; on the 25th of December, in the Constitution Square, the Bucharest Symphonic Orchestra with Andrei Tudor as the conductor and me at the piano; on the 27th-28th - a Marcel Pavel concert at the Bucharest State Circus, again with a big symphonic orchestra. We actually have 140 people there because we also have choirs and children's choirs. The whole period is full. This makes us happy and we always try to make every event be special.