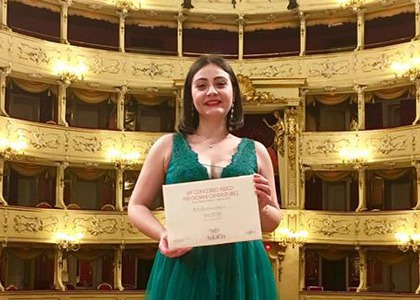 She graduated from the National University of Music Bucharest, received a scholarship from the Princess Margarita Foundation and was awarded in 2015 with the 'Iolanda Mărculescu' scholarship, offered by soprano Georgeta Stoleriu. Mezzo-soprano Martiniana Antonie is one of the winners of the 69th edition of the International Contest for young singers organized by ASLICO, the Lyric and Concert Association of Italy. The competition took place between 4th and 7th January 2018 at Teatro Sociale in Como. Martiniana Antonie is one of the three winners in the 'Emergenti' category - developing voices.

This year, over 190 singers from all over the world participated in the contest, and the panel of judges included, among others, Fedora Sorrentino, the new ASLICO President, and Dominique Meyer, Director of the Vienna State Opera. Martiniana Antonie spoke to us about this experience.

The International Contest for Young Singers organized by the Lyric and Concert Association of Italy has recently ended and we are glad that you are among the winners, especially giving that this edition had a large number of participants. Tell us a little bit about this contest!

I am very happy to be one of the three winners and, just between you and I, I also had the highest score from all the contestants. I auditioned at the Bucharest National Opera House because before the stage in Como there have been firstly live auditions in a few big opera houses in Europe and I fortunately passed to the next stage in Como. In the end, we've been 80 contestants for the two sections - the role play section and the section for young voices. And there have been three stages in Como, and, fortunately, I managed to pass them all.

You won at the Emergenti category.

Yes, it is about young voices in development. We, unlike those from the role play category, had to present five areas. In the first stage, we were allowed to choose one of the areas, and the second one was the jury's choice. In the second stage, both areas have been chosen by the jury, and in the final the jury chose again one single area for each contestant.

Which was the most difficult moment of the contest?

Honestly, I would say that the first stage, because we were so many and the program has not been necessarily respected; we had to stay in the backstage from the very beginning - I was no. 9 and I had to stay in the back stage since the performance of the first contestant without the possibility to warm up my voice again… and all the stress, being surrounded by so many singers and their emotions… but, all in all, any stage and any appearance is special and difficult in its own way.

Dominique Meyer, the Director of the Vienna State Opera was one of the judges of this contest. Which doors do you think this content could open for you?

I cannot tell for the moment. I would like very much sometime in the future to look back and say that this was the moment and the beginning of a collaboration or… but Mr. Dominique has been very pleased. I am truly happy for myself. The big prize to me were actually his words and he told me that from my entire repertory he really enjoyed the area from 'The Knight of the Rose' and this thing coming form his side means a lot to me.

Now you are in Italy. After a short time, you will come back in Romania. Do you have any projects?

Mrs. Rancea was also in the jury and she proposed me to perform 'The Barber' at Iaşi and we have to establish the exact dates of my return. Besides that, I had already planned even from before the contest a concert in China with the Rossini Orchestra in March. Also in March, I will have a concert in Iaşi with Mezzo-soprano Viorica Cortez and pianist Alina Pavalache at the French Institute. And in summer I will be back at the Rossini Festival in the opera 'Ricciardo and Zoraide'.

Does this contest also offer you a few appearances in Italy?

Yes, that's true, but for now I do not have the program of the masterclasses and of the concerts that represent the actual prize.

Martiniana Antonie thank you and I wish you the best of luck!