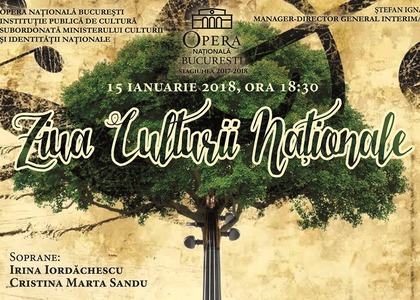 The National Day of Culture is celebrated today, on the 15th of January 2018, at the Bucharest National Opera by organizing an Extraordinary Concert. Starting from 18.30, the sopranos Irina Iordăchescu and Cristina Marta Sandu will perform on the stage as soloists, along with the mezzo-sopranos Sorana Negrea and Maria Jinga, the tenor Lucian Corchiş, the baritones Ştefan Ignat and Iordache Basalic, the bassos Iustinian Zetea şi Marius Boloş, who will be accompanied on the piano by Luminiţa Berariu, Mădălina Florescu and Liana Mareş. The Bucharest Opera Choir, conducted by Daniel Jinga, is also participating. The soprano Irina Iordănescu gave us some details about this event.

You are the headliner of this series. What can you tell us about it?

We all are, because it is such an amazingly beautiful and well-assorted program, featuring numerous Romanian composers, among which I name Tiberiu Brediceanu, Simeon Nicolaescu, Marţian Negrea, Sabin Drăgoi, Dan Dediu, Felicia Donceanu, Aurel Eliade, Teodor Teodorescu, Paul Constantinescu, Ciprian Porumbescu… there are a lot of Romanian composers who are celebrated, honored, and praised by my colleagues - the soprano Cristina Marta Sandu, the mezzo-sopranos Sorana Negrea and Maria Jinga, the tenor Lucian Corchiş, the baritones Ştefan Ignat and Iordache Basalic and the bassos Iustinian Zetea and Marius Boloş. We have Luminiţa Berariu, Mădălina Florescu and Liana Mareş as accompanying maestros. The All's Choir is taking part at this event, and so is The Bucharest National Opera Choir, whose choir maestro is Daniel Jinga.

It will be a concert accompanied by the piano.

Yes, indeed. We needed a piano precisely for us to be able to present such a complex program, given that not all the pieces have already had an orchestration or that they couldn't have been orchestrated in such short notice. I think that the selection of the pieces was very inspired and I trust that the audience will spend a delightful evening.

I am going to kindly ask you to issue an invitation for the people who would like to come to the Bucharest National Opera.

I invite them wholeheartedly, all the more that the 15th of January is the day when we also celebrate Mihai Eminescu, it is a symbol-day for the Romanians, for Romania, for our culture, for our tradition, for our Romanian spirit. They will certainly and fully rediscover this spirit throughout the program we have selected.