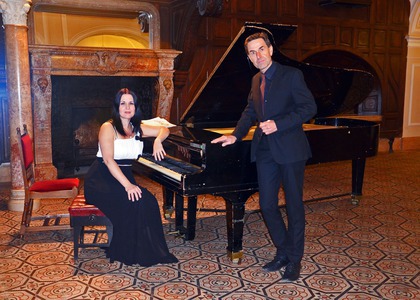 Radio Romania Music, Austrian Cultural Forum and the National Museum Cotroceni organize on 17 January, 19.00 hours, the concert-event Musical Bridges - bridges between past, present and cultures, a concert under the sign of the Centenary of Romania and the National Cultural Day. More about the event, but also about other cultural activities we found out from Thomas Kloiber, General Manager of the Austrian Cultural Forum.

Mr. Thomas Kloiber, can you tell us which is the mission and the main activity of the Austrian Cultural Forum both in Romania and around the world?

Austrian Cultural Forum from Bucharest, as well as other forums around the world, focuses on three main objectives of the International Cultural Policy of Austria: First, we want to present Austria on the international scene as a creative and innovative nation, which throughout history has been diverse and also rich in cultural and scientific terms. As the famous Austrian composer, Gustav Mahler said: "Tradition means passing the fire forward, not worshiping the ashes".From this point of view, we consider our work being an innovative one.

The second objective we are pursuing is a proactive contribution to the promotion of the European integration progress. We encourage the member states of the Union to better understand one another and encourage the emergence of new cultural initiatives that can better define the European identity.

The third objective is to establish communication links and peacekeeping globally by launching intercultural and interreligious initiatives that call for dialogue. That means an intense exchange of cultural ideas and activities. That is what we represent.

On 17 January, the Forum organizes, together with Radio Romania Music, an important event. What is the significance of this recital?

First, to have a concert at the official residence of the President of Romania, at the National Museum Cotroceni, is for us a great honour and a great opportunity for the Austrian Cultural Forum in Bucharest to contribute to this cultural dialogue that I mentioned. Also, if we think of the title of this concert, 'Musical Bridges', musical bridges, we realize that it is about connections between different areas: the past and the present, Romania and Austria. There will be a very high cultural dialogue between the Romanian pianist Raluca Ştirbăţ and the famous Austrian violoncellist Rudolf Leopold.

An important element of this concert will be the Romanian premiere of Sonata No. 1 for cello and piano by Constantin Silvestri, a special work rediscovered by Raluca Ştirbăţ. Silvestri's biography is a perfect example of the wonderful results born out of intercultural exchanges. He was born in Bucharest, the son of a mother from Bohemia and an Austrian father.

What other musical projects is preparing the Forum for 2018?

As you know, 2018 is a special year, full of anniversaries, not just here for Romania, but also for Austria. We are preparing a wide range of musical projects, starting with a classical music concert in Arad, where two Austrian clarinetists will sing alongside the local philharmonic. We will also promote artists from the New Austrian Sounds of Music program. The Airborne Extended Group will take part in the International New Music Week, where they will hold workshops and then, they will return in the autumn to present the new compositions that resulted from these workshops. And this is a good example to illustrate what we mean by intercultural dialogue.

This is your first year as General Manager of the Austrian Cultural Forum in Bucharest. What expectations do you have to increase this institution and its projects?

My expectations about this Cultural Forum focus more on qualitative rather than quantitative development. We need to be very responsible and to behave as such as regards our financial resources. When it comes to promoting Austrian artists, our objectives are ambitious. Of course, this year we will mark the 100th anniversary of the establishment of the Republic of Austria, or 70 years since signing the Declaration on Human Rights, by organizing events that we are preparing for the second half of this year, when Austria will take over the Presidency of the European Council.