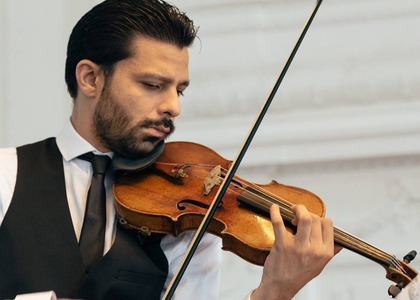 'Strad Style', one of the Discs of 2017 on Radio Romania Music – Interview with violinist Răzvan Stoica

First of all, I would like to ask you what your thoughts were when you heard that the album Strad style, released approximately a year ago, was nominated as one of the Discs of 2017 on Radio Romania Music.

It's truly an honor, since this CD is emotionally important for me, I could say it's special. I recorded the works for solo violin dearest to me. We're talking about Ciaconna by Bartók and the Sonata by Ysaÿe, but also works by Niccolò Paganini. I'm very glad, because Strad style was very well received on the European market and in the US, this based on a high number of online downloads. I haven't had a CD that was so successful before.

I would like to talk about the concert on February 14th, when you will be at the Radio Hall for Valentine's Day. What have you prepared for the occasion?

I'd say it's a sparkly repertoire, because we will perform - Andreea Stoica and I - works that are very dear to us as a duo, such as Tchaikovsky's Melancholic Serenade and other virtuosity works that we haven't played in a long time, at least since our first year of Conservatory, such as the Variations on an original theme by Henryk Wieniawski and the I Palpiti variations by Niccolò Paganini, a piece that I've played during the actual Stradivarius Competition, when I won the right to play the Stradivarius violin from 1729. The work has remained very dear to me and I can't wait to perform it again.

It will be year full of beautiful events, because this year I want to release a new CD with the Kamerata Stradivarius, with a more serious repertoire, in my opinion. I'm talking about works for violin and chord orchestras by Beethoven, arrangements from some composers that haven't been recorded before, such as Svendsen, and the concert calendar will be and already is rather full. We will also be playing a lot in Romania and I hope we can come back with a second edition of the Stradivarius-Bach Tour. This time we will choose another repertoire, but I won't reveal any secrets until we launch the tour officially.