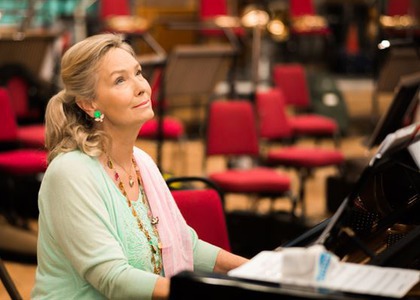 Interview with the pianist Elizabeth Sombart

The French pianist Elizabeth Sombart will be performing a recital on Wednesday, 24 January 2018, from 19:00 hours, in the Great Hall of the Romanian Athenaeum. The musician proposes an integral program Franz Schubert consisting of Impromptu op. 142 no. 3, Sonata D. 960 in B flat and Fantasia D 940 in F minor for piano four hands. The guest is the pianist Lavinia Dragoş. We find more details from the following interview.

How did you plan the program of this evening?

The premise was that I wanted you to listen to Lavinia Dragoş, who is a pianist and director of our Foundation, Résonance Romania. We will perform together Fantasiaby Schubert, a four-handed work, an extremely important piece of the repertoire of genre, known, but not often sung. This year it is also the anniversary of Schubert, and its great posthumous Sonata represents for me, somehow the situation of today's world. It is a work-testament, the last one that Schubert composed before he died. In this sonata, it is rendered a history of a life, almost of a world, by analogy, with all its contradictions, hopes and despairs. The composer introduced in this sonata silence, silence noted on paper. Schubert goes further than other composers. There is something in his music that touches the deepest subtleties of love and transcendence. For the same reason, we also included in the program a piano song written by Schubert, also, in the last weeks of life, a shorter work, but in which he managed to capture equally the two aspects, - human and divine.

It is already known that you have several ties to Romania, one of them being the Foundation Résonance, which you mentioned earlier. What projects appear on the agenda of the Romanian Foundation's subsidiary for the next period?

The mission and the specificity of Résonance Romania, which is led by Lavinia Dragoş, is the teaching of musical phenomenology, which is the pedagogical direction specific to the foundation and which comes from a great Romanian musician, Sergiu Celibidache. We pass on the ideas of this musical phenomenology to a prodigious group of children, if we can call them like that. The quality of education and listening, that this new pedagogy offers to us, it also, teaches how to communicate what we do to the public. We organize many concerts in nursing homes, orphanages, prisons, this being the second mission of the foundation, along with education.

Finally, what does the year 2018 holds for the pianist Elizabeth Sombart?

At this moment I am preparing a very big concert in London, which will be presented in several parts of the world through a tour. I love the idea of bringing classical music closer to as many people as possible, so I recorded with the Royal Philharmonic of London the most beautiful Adagio in piano concerts: Bach, Mozart, Beethoven, Grieg, Saint-Saëns, Rahmaninov, Chopin, Ravel and others. In this new type of concert that I imagined, which will be performed on the 2nd February for the first time, at Cadogan Hall from London, with the Royal Philharmonic, Adagio are interwoven with orchestral songs that render, every time, the emotion of Adagio, being at their turn music that will be easily loved by the audience. I chose the parts in Adagio because I live that the human soul is, first, touched by the slow songs. I noticed that, once someone likes the slow part of the Concert by Chopin, for instance, he will love the whole concert due to the slow part. This is because all composers have transposed in the slow movement, the soul, the most humane and painful feelings, but always shrouded in hope.

One important thing for the Foundation Résonance, in 2018, is that we are celebrating 20 years, and this year we obtain the European recognition of the "Resonance artist" profession.