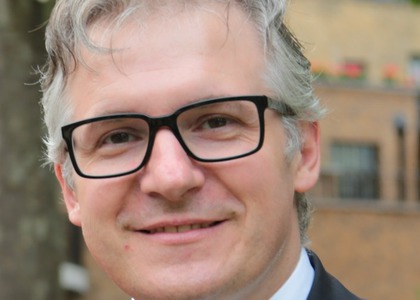 Interview with Dorian Branea, Director of the Romanian Cultural Institute in London

On Thursday, February the 2nd, begins a succession of Enescu concerts at the Romanian Cultural Institute in London, dedicated to the centenary of the Great Union, by which the organizers desire to capture several aspects of the Romanian musical creation within the last hundred years, during this anniversary year. The Director of the Institute, Dorian Branea, has informed us about the program of the events, in the following interview.

On Thursday, the Romanian Cultural Institute is organizing the first musical event dedicated to the centenary of the Great Union. I invite you to tell us precisely what this is all about.

I'm glad you are asking me this question, because this is one of the projects that we cherish the most in the year of the centenary and because, anyway, a great deal of the Romanian's Cultural Institute program in London is dedicated to events that are celebrating this major anniversary. But we want to celebrate it in a manner which is, perhaps, more creative, or maybe more unusual, without anything festive, and that's why we thought about a succession of projects, this project being a part of the succession, which will look back at these one hundred years of Romanian history, from 1918 - and a few years before 1918 - until now. Within these Enescu concert series - one of the oldest musical series or permanent programs of the Romanian Cultural Institute in London - we will organize a succession of concerts and recitals, which will evoke one hundred years of Romanian musical creativity. We are beginning now with a concert dedicated to compositions written during the First World War. Of course, according to the rule to which we have already accustomed our British music lovers, one of the plays will be by Enescu. We are happy to have here with us, in Belgrave Square, in our sumptuous headquarters and in our concert hall, the people from Trio Lipatti, a very good trio, of certain great value in Europe, and they will perform a program from which Enescu will not be missing, and which will also contain pieces by Frank Bridge, Claude Debussy and Zoltán Kodály. To anticipate, we will continue in the next months, until the end of de centenarian year, holding concerts dedicated to Romania during the interwar period and the Romanian composers of that time. After that, it will be about the music during the dictatorship. It is well known that, even during that time, we had extraordinary composers and great music, and high quality culture as well, so we will take a look at that period, too. Of course, towards the end of the year, we will finish up with a concert customized for the Romanian music of the 21st century, and then we will focus our attention on the contemporary or next to contemporary composers.

As a completion, could you name some of the musicians that will help you create all these historical scenes?

In a few days, the Trio Dinu Lipatti's members will arrive here, at the Romanian Cultural Institute; in April, we will have violinist Maria Marica and pianist Cadmiel Boţac as our guests in the concert called Muzica în România Mare - Music in Great Romania. After that, in June's concert, called Partituri dincolo de dictatură - Scores beyond dictatorship we have Andrei Chivu and Mara Dobrescu as guests, and the recital dedicated to Romanian music of the 21st century, brings back in our concert hall, from the heart of London, Mercury Quartet, an assembly that we have collaborated with before, and which is, also, well-known in Europe.