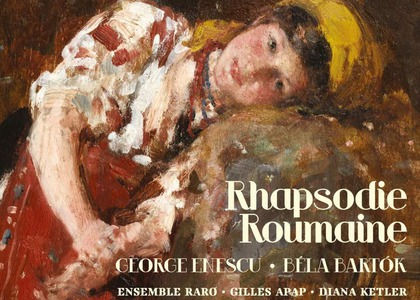 The "Raro" musical ensemble has recently released its new album which includes music by George Enescu and Bela Bartok. The viola player Răzvan Popovici, the head of the ensemble, offered us some details about this discography release:

"Given the fact that this is the only year when we have the chance to celebrate the Centenary of the Great Union, we, the organizers of the "Sonoro" festival, thought that it would be wonderful to pay homage to this special event. We recorded the album last year, in October, in Munich, with the support of the Bavarian radio-broadcasting in Munich, afterwards the album was produced by Solo Musica, at Sony, Munich and the release took place in Musikverein in Venice a few days ago. For now, the CD can be bought in Europe and, starting with March, in Japan and America too. The album is named "Rhapsodie Roumaine", we tried to create a Romanian musical portrait that is as complex and diverse as possible. We recorded for the first time George Enescu's Rhapsody No. 1, arranged by the Vienesse composer, Thomas Wally, for a piano quartette. For this quartette we also recorded the song "Ville d'Avrayen" by Enescu which the headmistress of the "Enescu" Museum, Mrs. Cristina Andrei, was kind enough to offer to me. Meanwhile, it appeared at the Publishing House of "Enescu" Museum and Cultural Institute too and it is a splendid miniature composed by Enescu for the social gatherings with chamber music that take place in this mansion (Ville d'Avrayen), where the Menuhin family used to stay evey summer when they came to bring Yehudi Menuhin for his violin lessons with Enescu. And even for the CD booklet I obtained a few marvelous pictures, once again by virtue of the kindness and support of "Enescu" Museum and Mrs. Cristina Andrei. Actually one of the pictures shows a musical gathering in front of the piano in Ville d'Avrayen
where we can see Enescu together with Menuhin, Hephzibah's sister and the father, Moshe Menuhin. Therefore, this is the second song of Enescu which is followed by a reference song which is Sonata No. 3 by George Enescu for violin and piano, with a traditional Romanian character, to the album also being added a few songs composed by Bela Bartok. These were joined by a short song recorded by Gilles Apap and Diana Ketler, "Seara pe uliță". And I worked together with the viola player Christian Naș on a few duets by Bela Bartok for two violas."