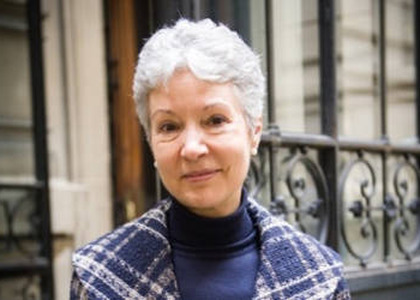 The École Normale de Musique de Paris 'Alfred Cortot', one of the most prestigious musical institutions in France, offers a masterclass which will be held in Bucharest between 19th - 21st February by professors Florin Szigeti and David Lively. The accompaniment will be provided by pianist Verona Maier. The classes are open to the instrumentalists with ages between 16 and 25, and the Normal School will award a scholarship for every instrument (violin and piano) for the academic year 2018-2019 or 2019-2020. Contestants are recommended to perform a work from the French repertory.

We have discussed about this project and about the - past, present and future - collaborative relationships between the Normal School and the Romanian cultural scene with the director of the institution, Mrs.
Françoise Noël-Marquis.

We are honored by the fact that you chose to offer - with the help of the professors from your institution - masterclasses in Bucharest and even two scholarships for the following academic years. Which is the story behind this initiative?

Actually this type of initiative is part of your school's mission, the way it was conceived by Cortot. Our main mission is to make music and French culture known in the entire world. We wanted to rebuild the relationships between the Normal School and Romania, which had been very tight a while ago. As you know, Dinu Lipatti studied at the Normal School, George Enescu was a teacher here, and the relations were not as tight after this period. We want therefore to renew them, and Lipatti Centenary was a first stage of this process. In order to relaunch the collaboration with Romania, we thought that the best way to start would be to remind or to present for the first time - depends from case to case - the type of education that our school promotes, through the masterclasses held by our teachers, and that would facilitate the entrance of the talented students in our institution.

Could you please describe in a few words the two professors who will come to Bucharest, David Lively and Florin Szigeti?

David Lively is a pianist born in the United States, but he moved to Paris when he was very young, at 13, to study at the École Normale de Musique. He was a laureate of great international contests, such as Queen Elizabeth and Ceaikovski, continued his career, and today he is the director of the contest department of the École Normale de Musique and is frequently invited to be part of the jury of international contests.

As I was saying in the beginning, you will be offering two scholarships for the next two years at the École Normale de Musique. What is the criteria that will be taken into consideration in the selection of the young musicians?

The first one is certainly their level. The Normal School is a higher educational institution, and this means that the young musicians have to be capable of taking the classes of higher education. Then, almost as important is their potential to grow; the Normal School cultivates professionals, and the musicians' world is a tough one, in which the competition is very serious, so we tend to choose musicians who stand out through rapid progress. Motivation is very important as well, giving that the Normal School is very severe. We are not at all indulgent as an institution. To give you an example, the diploma is obtained through a contest in two phases, out of which the first one is eliminatory, thus very, very difficult. Therefore, you have to work very hard, to get involved, and if the students are not motivated it is less likely that they will successfully integrate at the Normal School. We have to feel that they truly want to study at the Norma School. Plus, the candidates should know French and even if they do not yet, they should start preparing themselves before arriving here because all classes are held in French.

And the selection will be made by the two professors present at Bucharest?

Yes, definitely. David Lively is the director of the contest department of the Normal School, so he has perfect knowledge of the functioning mechanisms of the school and the minimum level required, therefore he has all my trust to validate the two scholarships.

I would like to conclude this discussion with a subject of great interest for us, pianist Dinu Lipatti. In the spring of 2017, the Normal School celebrated the centenary of his birth through a special event entitled Homage to Dinu Lipatti. What does the name Lipatti represent for the École Normale de Musique de Paris?

Dinu Lipatti is a fundamental character for the École Normale de Musique de Paris because Lipatti has remained to this day the perfect illustration of what we - as an institution - are trying to do. First of all, spot the talent. Alfred Cortot was the first one to anticipate the great talent of Dinu; we all know the story of the Contest from Vienna. Lipatti then entered the Normal School at Cortot's invitation. He studied piano under Cortot and Yvonne Lefébure's guidance, but a very important thing for us is that he didn't stop to piano. He studied composing as well, with Dukas, and conducting, with Munch. So he was not only a brilliant musician, but also a full musician, and this is what we - the École Normale de Musique - want to accomplish.

As a conclusion, we hope that this is just the first stage and that we will have the opportunity to develop this initiative in the years to follow.

The registrations for the masterclass are made online by sending a short curriculum vitae and a video or audio excerpt to the email address noesisrmm@gmail.com, until 31st January 2018.