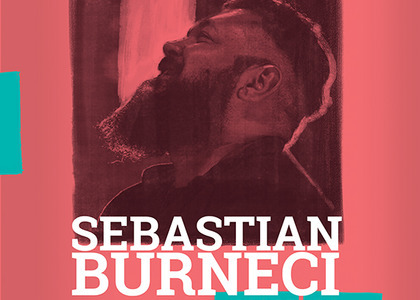 “Unspoken” with Sebastian Burnecişi the trumpetist from Room Radio Orchestra

It's been a project initiated by Sebastian Burneci, the trumpetist, one of the most valuable musicians from the new generation, lead singer in the Big Band Radio, at the same time the founder and the leader of Bucharest Jazz Orchestra and The Quartet that holds his name, member in the international group BaLako, and always present in a-first-spoken projects of our stage - I'm thinking about the "Garden Beast" , an album belonging to the saxophonist Mihai Iordache, at "On the road", signed Jazzy birds, beyond the album "Stories from Bucharest" launched under the name of Bucharest Jazz Orchestra. We're not referring in this context at shows from the pop music sphere, of movie and animation. Sebastian Burnecieste, both graduate of the University of Music from Bucharest of the Conservatoire of Groningen - Holland, specializing himself in jazz. Receiving the support of The Cultural Romanian Institute, he was one of the 606 Club guests from Chelsea - London; also, last summer he has participated at the International Festival "We Jazz Bodrum" on the shores of the Aegean Sea. In the interview he gave our frequency, the musician told us about his most recent projects:

Sebastian Burneci, a first-row profile on the concert's post that you're going to sustain on Wednesday, 7th of February, as a lead-singer of the Room Radio Orchestra. I don't think we should be expecting a Concert for trumpet and orchestra by Torellisau Haydn. The post doesn't reveal anything, so….what are you preparing for your audience this time?

Who is signing the music?

All the plays are being composed by me and orchestrated by the lady-conductor of this concert, Simona Strungaru, with the exception of a standard jazz "Round Midnight", that's being orchestrated by George Dumitriu.

Simona Strungaru is a lady-conductor, she has a Holland experience, she's leading her own orchestra, "Simona Strungaru Symphnics". How did the members of the Room Radio Orchestra receive her?

Simona is a very likeable person; and she's also a very dedicated person and one has to be really stubborn not to like her or relax in her presence.

So, how does this collaboration goes on?

Everything goes on very well. We are friends, we were colleagues at the Bucharest Conservatoire with the almost every member of the Room Orchestra. Moreover, the music is very profitable for the orchestra, in the sense that we don't use it as a color that enhances us-we, representing this Jazz Quartet with very sophisticated instruments that make us more interesting. I believe we truly enhance it and we truly have a symphonic approach of my plays. And the rhythmical section makes the orchestra possible to exist, just as it should have happened on a dedicated scene.

What kind of sound should we expect?

It's hard for me to describe in my own words how's going to sound. It's kind of a jazz adorned with elements of contemporary music. There are lots of bold sounds, there are lots of original combinations of instruments. We also use electronics in one of the plays. We're trying to exploit the piano as a solo instrument of the symphonical orchestra, this being another idea the Simona is sustaining, she being a pianist at the core. I believe it'd be best to meet there and everyone should decide for himself.

A few words about those that you're going to perform with - a jazz trio. There are musicians from Bulgaria -Teodor Petkov, Mihai Ivanos, Borislav Petrov…

Yes, all of them are Bulgarians, but the strongest relationship is that with Borislav, who was a colleague of mine in Holland, who's also a fantastic musician, a complete one. He understands very well what could happen both in large and small assemblies and he's using the drum set as an adjacent percussion instrument and what's him at the basis. He knows to integrate himself in a personal and interesting manner in all kinds of contexts. And the others are his trio with whom he's being working in Bulgaria and not only.

Because you've remembered Holland, what would be the lesson that you've learned at Groningen?

From an acoustic point of view, it experiences a relaxation, a much stronger relaxation than we've ever experienced in those five years of Conservatoire in Bucharest, and what I believe, it's reclaiming its right in an intense manner in everything that's happening, in what's been playing, in what's been composing , in the contexts that it's creating and in the collaborations between people and a new energy is feeling. I believe that, as simple as that, everyone is much more aware of the reason for which they are making music, the reason for which they are a teacher, the reason for which they are collaborating with students. And, in general, perhaps I wanted to see thing this way, but it's having a little more sense everything that's happening. It seems to me that in Romania there is tendency in losing oneself. I don't know whether it's conscious or not, but at a certain level, we're suffering of a duoze of chaos that's been twisting our heads off.

Aftet the album "Stories from Bucharest", what would come next?

So, a CD will be launched after this concert

That's what I'm proposing myself. We're registering this concert and, if everything's going come out the way I think it would, there comes this CD. Of course, with Bucharest Jazz Orchestra I'm also having some plans. We'll be doing music for a Romanian musical - a contemporary love story with jazz moments. I'm very glad because they have invited us to register it and I believe it's going to be a very nice and beautiful product.

Betweenn Big Band Radio, Bucharest Jazz Orchestra and the Quartet, Sebastian Burneci, where do you find yourself better structured?

I do something different in them.

Which of these projects is closer to your inner structure?

All three are there. I didn't even think about making a hierarchy, because in Big Band Radio is the place where I have was self-made and maybe the most important school that I have graduated, or I'm still having exams, I don't know for sure. In the Big Band Radio I play the lead role of a trumetist, of prime-leader, but, at the same time, under the bow of a lead-conductor. Because, in most cases, it's the same, I have developed a relationship and I know my place as a whole and in particular with this conductor and in relationship with this other parties. At Bucharest Jazz Orchestra I lead it. Ok, I don't lead it, it's another perspective, because one can see differently the assembly when you're sitting on the chair of the one who's responsible for everything that's happening over there. And in the Quartet, it's practically other job. Everyone fills it differently, the acoustic moment. So, those three are very close to me. That's why I'm part of them and I strive to make them work as well as I can.

What do you want to transmit through "Unspoken"? That fact that, maybe, jazz music coexists very well with contemporary and classical music?

Yes, I made a text that I have inserted in the hall program that's also the on-line event's description, in which I'm also talking about it. In my opinion, we have to classify less musical styles, because, in this way, we will allow ourselves to enjoy what we're hearing without asking questions whether it's being heard equals quality in most people's opinion, or whether, listening to the same style of music we place ourselves where we'd like to be (whether or not we have something to do there), but we believe about ourselves in that moment that it'd be helpful if we were consumers or something like this. I believe that's very important for people to do what they feel and consume music a lot more through what's been communicating them through listening, than for the zone where it's been placing them, being consumers of a pre-established style. That's why I said: "Unspoken", willing to transmit more, without words.