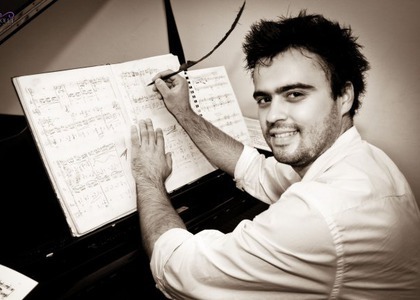 Romanian composer Vlad- Răzvan Baciu has won The Composition Prize of "Carl von Ossietzky" University in Oldenburg with his work "The Cry of the Kogaionon" for Big Band and Orchestra, which was rewarded with 1000€.

Vlad Baciu, you won
The Composition Prize of "Carl von Ossietzky" University in Oldenburg with your work "The Cry of the Kogaionon" for Big Band and Orchestra. What does this experience represent to you?

I am very glad of this result and I want to thank my composition teachers with whom I have had the chance to work - maestro Dediu, Mrs. Violeta Dinescu. In my work, "The Cry of the Kogaionon", I tried to represent a kind of symphonic mourning in honor of the memory of King Mihai I. Actually, I tried to imagine how the stones of the Dacian's mountain, Kogaionon, produced a dirge in the memory of the king. It was an unexpected experience, because I knew the conquest, I wanted to participate and I felt challenged to write for big band and symphonic orchestra. I had not done that before and I thought that it was time to start a new project and to accept one more challenge. I started to write and I sent my composition with no expectation…and it happened that I won the first prize.

How do the Dacian ideas from your work resonate with the sound of the big band?

Big band can be seen as a kind of brass band. I did not use dead march elements, but the presence of brass takes us to the possibility of a brass band, of a dead march.

When will we be able to hear this work?

The work will be released on the 23rd of June this year in Oldenburg, under the baton of composer Rita Murtada.

What other projects are you involved in in the very next period?

I try to hold another concert with Oxigen Orchestra which I founded recently; I am trying to bring in this concert works of some composition teachers, as well as works of my colleagues. This time, I try to organize a Romanian music concert, mainly with works written for strings. As concerns composition, there are other works I am working on and I hope that they will be as successful as the rewarded work.

Thank you. I wish you a lot of prosperity in everything you do.