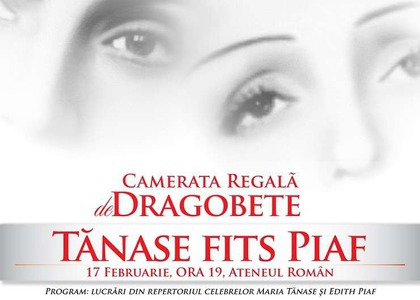 Special concert of the Royal Camerata for Dragobete, conducted by Cristian Oroşanu

The Royal House organizes a special concert that will take place at the Romanian Athenaeum on February the 17th. We found out more from conductor Cristian Oroşanu:

Maestro Cristian Oroşanu, on the 17th of February you will be at the Royal Camerata for a special concert for Dragobete - Tănase Fits Piaf. I suppose it's a reinterpretation of an older project of yours - Fits sings Piaf.

Indeed, during the previous season I started a national tour with Edith Piaf's repertoire and I presented this concert in Bucharest as well in December at the Radio Hall. In the meantime, I've changed our project, or rather I set up a new project because I discovered something spectacular, which is that Maria Tănase and Edith Piaf sang some of each other's songs. Even though they never did get to know each other, they have, in fact, many things in common, including this repertoire that they performed. I started this new concept alongside Alexandra Fits and Mariano Castro, the one who sets up our shows. It is a special program that we have just performed in Braşov twice and the first time that we present it out of Braşov will be here in Bucharest. The Royal Camerata reacted very quickly to my proposal and I am glad to conduct this program at the Romanian Athenaeum on the 17th of February. I am sure that the audience in Bucharest will appreciate the Tănase-Piaf project just as much as it did the Edith Piaf project in December at the Radio Hall… maybe even more than the other one - given the fact that half of the program is about Romanian music, Romanians will surely love it.