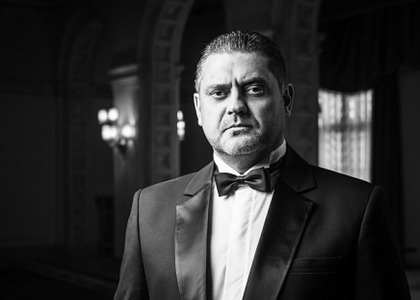 On Sunday, February 18, and Thursday, February 22, the National Opera in Bucharest proposes to the public the premiere of "Don Carlo" by Giuseppe Verdi. The direction, the decor, the costumes and the lights of the show are signed by Mario De Carlo, and the conductor will be the master Tiberiu Soare. Among the guests are Don Carlo's interpreters - tenor Daniel Magdal, Elisabeta di Valois - soprano Celia Costea and Philip II - bass Ramaz Chikviladze, while the characters Rodrigo de Posa and Princess Eboli will be interpreted by the soloists: baritone Cătălin Zoropoc, respectively mezzo-soprano Oana Andra. Baritone Ştefan Ignat spoke about the close premiere - the interim general manager of the National Opera in Bucharest:

Mr.
Ștefan Ignat, I think you are at your first premiere since you took over the interim directorate of the National Opera in Bucharest. You have opted for a Verdian work - Don Carlo. Why this title?

Because 27 years ago I listened to it for the first time - I was a student - and I wanted to sing it, I wanted to get to know it thoroughly and I managed to do this two years ago. I debuted in it after 25 years and I set out that when I have enough strength, decision-making power, I will put it where I am. And here it happened at the Bucharest Opera after so many beautiful years.

You have invited Italian director Mario de Carlo for this show. He also signs the decor, the costumes and the lights - a difficult task that he himself compares with "throwing you off a cliff in Acapulco." How did he imagine this fit?

From the very beginning, when I called him, I set out to advise him in a certain way to make a traditional, classical fit, as I have imagined in all these years. And I explained how I wanted it, how I would like it to be, and he was totally in agreement. He said, "Okay, that's how we'll do it." Because after so many years of modernism, of modern things that we of course do not put aside and do not contradict them, he said that it is the case that the National Opera in Bucharest should return to the traditional for a while. Of course, we also have modern works, and works that will be half-traditional half-modern, works to be done nowadays or shortly before.

I see you already dressed in a costume from this show. The next question was if you were tempted to enter the show distribution. I think you'll come from the premiere.

No. I am not the man who desires to be "me", but at the moment, by the function I own, I wish the theater to be the winner, not me. By mounting this work we all won. I won a young voice (Cătălin Țoropoc) of a colleague of mine who learned and whom I asked to make the premiere. Do you know that when the directors come, if they are conductors, want to lead the premieres as much as possible, they want to sing the most of the singers, which is beautiful and they want for the first time the world to talk to them. No, I thought otherwise. I want to do something for the opera, I do not want to do something for me, because, thank God, in these 27 years of career on the stage of the National Opera in Bucharest I have had plenty of fulfilling rewards. And I can say that on February 22, I will be in my second premiere; it is no shame to sing and then to make a show. It's important to sing it.

Both shows are premieres. What can you tell us about the two casts?

The interpreters ... when we analyzed the distribution we started from Phil. Philip must be the character around which the other partners, the other characters, rotate. That's why I thought about two powerful voices in this band of singers - I will not give their names now because I'm going to wait for the world to come to the shows - two international basses that do everything for this work to come out as we thought it here, around the artistic council, as we imagined it. After that, of course we have two tenors in the role of Don Carlo; a tenor of the house who has sung, who sings, who was hired at the opera (I'm talking about the second cast) and, of course, a tenor very well known to the general public in our country, a tenor of Romanian nationality brought from Berlin. After that, we are two baritones of the house, two young baritones - so I think and we all think. Elizabeth - a soprano from the house, from the opera and an exceptional guest, also Romanian. For Eboli, there are two interpreters from us. And what can I say ... around them I made this work to live, to have life. We hope we will have the desired success; what is happening because the tickets are already exhausted. We will have five or six performances by the end of the season, so everyone will be able to see us.

I understand it will be a traditional direction, to the likes of traditional music lovers' liking. What do you think will attract to this mount the young part, which is more focused on the modern?

Now, if we are talking about a part of the youth who wants modernism, they have something also modern to see - a chessboard, where kings, queens, fools, horses and laps are. You will see, it is very ingeniously done! Direction will thank everyone, in my opinion - both modernists and traditionalists. I express my happiness because we realize what has not been done for many years at the National Opera in Bucharest - a show for all!

And you brought Tiberiu Soare as conductor.

Tiberiu Soare is our conductor, he is the music director of the Opera, he is the most in-shape conductor in Romania, in my opinion and not only mine, but also the other opera critics or commentators. And it seemed normal that this work of works should lie with him and to be him who was going to direct the premiere.

What other surprises do you prepare for National Opera viewers until the end of the season?

Oh, there are many, many and beautiful. We thought to give to the children the children's works, because in the last two years there were no children's works. We already had Puss in Boots, we'll have the Magic Flute, we'll have Hansel and Gretel. We have children's performances of the Opera Children's Choir, which makes the audience's delight. On March 31, we set out to make the premiere of the Cavalleria and Pagliacci because there has not been such a title for a long time. On May 6, I scheduled the Sleeping Beauty from the sleeping forest with foreign stage designers and choreographers. Then, on June 9, I scheduled the Troubadour by Verdi, which also had a lately unsuccessful installation in the last ten years, was a modern fit, and yet the audience did not taste it because not everyone likes modern, especially in these beautiful works.

Mr. Ștefan Ignat, thank you and I wish you good luck!

Thank you as well. See you at the premiere and success to all my colleagues!