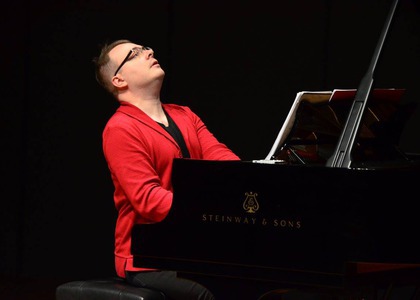 The pianist Matei Varga will release the record 'Early Departures'

In May of this year, the most recent record you are signing Early Departures will be released - What is the story of this project?

It is a special project - we can say that all the projects that end in the appearance of a CD are special - but it is important to me because it includes two names that have been enormous in my evolution and development and still mean a lot. First, I would like to mention the name of Tudor Dumitrescu, a pianist, as we know, a genius who left us so early. That's where the title of the CD comes from, "early departures before time ...". I, since I was a kid and I was studying the piano, I remember that I had discovered the famous Prelude C-sharp minor, that I have sung many times in Romania and I loved it extraordinarily long, although it is a play of a minute and a half. It's so romantic, so infused with Scriabin's special spirit - and yet so personal and original - that it was one of my favourite songs that I gave as a bis during my childhood and college years. Finally, I learned all nine - unfortunately only nine - the preludes he left us, and it seemed almost my duty to record them, for the first time, as I know, at an international record label, and I can show them to the audience around the world because, surely, the CD will be available in any country and any market ... I think Tudor was a real genius and, although he has left us so little in terms of composition, these preludes are worth to be played not only by me but, I hope, by many others who will follow. They will listen to this record and will realize the quality of the works. To continue, last year was the centenary Lipatti and many of us, pianists, paid tribute - each in his own way - to this sacred monster of pianistic. I am happy to be able to offer to the audience, on this new record, two tracks that have never been recorded so far: a very short prelude, less than a minute, to be part of what would be called Petite Suite (unfortunately this project has not materialized, but this little 45-second fugitive prelude has been left with a tremendous charm and has in its composition many of the special qualities of the composer Lipatti); In addition to this prelude, a play that is enormously dear to me and which I love very much. I discovered it two years ago when, in fact, it was also published, I think, for the first time in Romania: The romantic Sonata, again a work of great virtuosity, a work that shows us Lipatti in the most precise light as a composer when, in fact, the play reveals all his qualities as a pianist, first of all, which he has designed in her writing. It's a work I've already sang in New York and I started it in the United States one year ago, and since then I have played it many times. The CD also includes Leoš Janáček's suite In the mists, somewhat connected with the idea of premature departure because although Janáček did not die at the age when Lipatti and Tudor Dumitrescu disappeared, his daughter ceased to live after an incurable disease at that time, she was only 20 years old, he wrote this work - which later became one of the great piano works of the 20th century - motivated by the extraordinary pain of losing his child. And at the end of the record, I propose a transcription after Clarinet Concerto by Bach because we could not conclude otherwise this ode, this homage to the youngsters who left us too early than the eternal Bach.

Along with this record, I know you're going to have several concerts. I think next week will follow a tour. What it looks like the following months on your agenda?

Next week I will go to the western coast of the United States where I will present, along with some friends, another very important piece of the 20th century, this time in the chamber repertoire, Quartet for the End of Time by Olivier Messiaen. It's a play I learned especially for this concert tour and I love it more and more every day, as I study it with my friends. We'll play it in Portland and Los Angeles, and next month I will have a recital in Paris. In April I will go to San Francisco and I am very happy to tell you that in 17 and 18 May, I will return with great joy to the Romanian Athenaeum, where, following the invitation of George Enescu Philharmonic and Mariana Nicolesco, I will perform alongside the Italian master Elio Boncompagni, Concerto No.4 in G major by Beethoven. I can not wait to see and feel the warmth of the Bucharest public who is so dear to me!