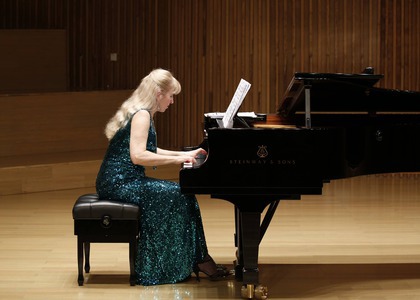 The École Normale de Musique Alfred Cortot de Paris, one of the most prestigious musical educational institutions from France, offers master courses at George Enescu National High School of Music in the Ion Voicu and Alexandru Tomescu rooms. The classes are held between the 19th and 21st of February 2018 and the musical accompaniment is provided by pianist Verona Maier. The classes are open to musicians between 16 and 25, and the École Normale will offer one scholarship in Paris for each instrument (violin and piano) in the school year 2018-2019 or 2019-2020. We found out more from the project coordinator, Alina Pavalache.

Noesis Enesco
opens the first academy of the École Normale de Musique de Paris in Bucharest. I would like to start by asking you what the Noesis Enesco exactly is and what are the main activities in which it gets involved.

Noesis Enesco is an NGO which I founded last year in Bacău. The first objective is the organizing of the master class. We started in Tescani in partnership with the George Enescu National Museum, with a certain focus on Enescu and the French repertoires.

How did the initiative to organize the classes of the École Normale de Musique de Paris in Bucharest emerge?

How will the schedule of the events in Bucharest look like?

The event starts with an opening and welcoming speech for the participants. Afterwards, the two professors, David Lively at the piano and Florin Szigeti at the violin, will listen to each of the applicants and in the afternoon they will begin the actual classes, ending at around 16:30 on Wednesday; at 18:00 o'clock the final concert will take place and the two maestros will perform the first part of Sonata No.3 by George Enescu in its opening.
Interview by Ana Diaconu
Translated by Georgiana Nuțu,
MTTLC, 1st year, University of Bucharest
Return to archived Interviews