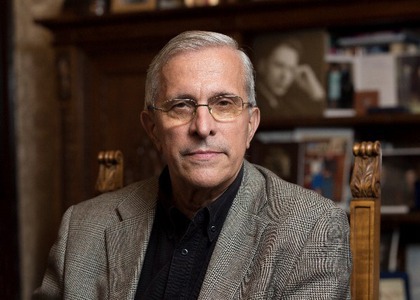 "About the world we live in" is the name of the series of conferences and cultural, scientific dialogues hosted by the Romanian Athenaeum and organized by Humanitas Aqua Forte Foundation, starting on Saturday, February 24, 2018. The conferences are supported by prestigious culture specialists and people on various social and cultural themes. This was why Lucian Haralambie had a conversation with Andrei Dimitriu, General Manager of "George Enescu" Philharmonic and, in the same time, The Guest of the Week at Perpetuum Mobile:

Good evening! Thank you for your invitation.

At the end of this week the series of conferences "About the world we live in" will start at the Romanian Athenaeum. The first meeting with the public takes place on Saturday, February 24, starting with 11:30, and the spotlight of the evening are Horia Roman Patapievici and Gabriel Liiceanu. What is the theme of this first conference?

The theme is called "The Splendour of Europe" - it is the title that the lecturers have chosen - and it is a theme that wants to call into question the status of the European civilization. In a world where globalization is in fact a melange between different models of civilization - which does not always mean progress, a confirmation of the values of the European model - the theme will certainly give rise to a special interest. The two lecturers are brilliant personalities of the Romanian intellectual elite and will surely be a present to the audience that will be in the hall.

The project is done together with the Humanitas Aqua Forte Foundation and is framed into the projects that we, at the Philharmonic, dedicate to the 150 years since the first symphonic concert and 130 years (because this year is a multi-anniversary year) from the inauguration of the building.

But I would like to talk about the series of conferences "About the world we live in". We are talking for four days about conferences.

There are two conferences on Saturday and Sunday, on Monday, Tuesday and Wednesday there will be one. There are seven in total.

What are the other speakers? Who will the audience meet at the Romanian Athenaeum?

The recipe is a classical conference, a lecturer ... and I'm going to mention those who are in this posture. In the second part of the conference is a dialogue that is in the manner of the conferences of the Athenaeum, a dialogue between a Romanian intellectual and lecturer. The lecturers ... For the debut, Liiceanu and Patapievici with a dialogue on the theme I told you about. This is on Saturday morning. Saturday at 17.30 will be a physicist - I guess that in the world of physicists is very well known - Cristian Presur, who works in a research centre in the Netherlands, and as his partner is Vlad Zografi.

On Sunday, the lecturer is Victor Ieronim Stoichiţă - a personality in the field of art history in the European university and academic world, with a status that honours the Romanian culture; he was recently named the head of the European department at the Collège de France. Partner - Andrei Plesu, personality that is not to be talked about too much, remarkable, as we know him. Sunday evening, Dr. Martin Constantinescu. The theme will be "Medicine of the 21st Century"; partner - Gabriel Liiceanu.

For Monday, a theme that I think extends the area of interest - "The End of Globalization". The conference is presented by the US Ambassador Hans Klemm, and as a dialogue partner in the second part is Ms Corina Şuteu, the former Minister of Culture. He is a historian, Olivier Schmidt on Tuesday, and on Wednesday Thierry Volton, who has a very interesting theme, "The State of the World at the Beginning of the 21st century", one of the authorized voices on the debate of a topic of interest for Romania - Communism.

I'd like to go back to the anniversaries you talked about a little earlier. It will be, 150 years following the establishment of the institution you are managing, 130 years since the inauguration of the Romanian Athenaeum - celebrated recently - and, of course, the Centenary of the Great Union. What are the Philharmonic's projects to mark all the above?

Integrally, the season of this year will include more events related to these anniversaries. At the end of November, on November 30, there will be a Centenary concert. At the desk will be Christian Badea. The patronage of the concert will be that of the Romanian Government. On the 15th of December, when the 150th anniversary of the first concert is celebrated, the orchestra and the choir will offer a concert led by Horia Andreescu, in which they are trying and probably it will be a success to sing the program sung 150 years ago under the direction of Eduard Wachmann. There is another concert on November 25, which we dedicate especially to all the anniversaries related to the year 2018 - 130 years after the construction, 150 years after the concert, 110 since Enescu first came on the stage of the Athenaeum and directed his own composition - Poema Română. Since 1938 there are 80 years since the inauguration of the fresco and a round number since Enescu Festival debut. For all these events I mentioned, there will be a concert on November 25 and I hope the soprano Angela Gheorghiu will participate.

Monthly, one of the concerts will be dedicated to these anniversaries. Guests - this year we have a few more special names - Christian Zacharias, Foster ...

What time will Christian Zacharias concert?

April. Foster, in the October season. Elisabeth Leonskaja will be present, Andrei Ioniţă - the award-winning violinist in "Ceaikovski" Competition, pianist Daniel Cojocaru, winner of last year's "Rubinstein" Competition, Elisabeth Sombart - a pianist who is at the third concert in Romania, she also has a connection with Romania, her grandfather being doctor Nicolae Leon, dean of the Faculty of Medicine in Iasi, from the end of the 21th century-early 20th century.

So, a rich calendar in the coming period. And, towards the end of 2018, important concerts at the Romanian Athenaeum. Mr. Andrei Dimitriu, thank you very much for your presence at Perpetuum Mobile!