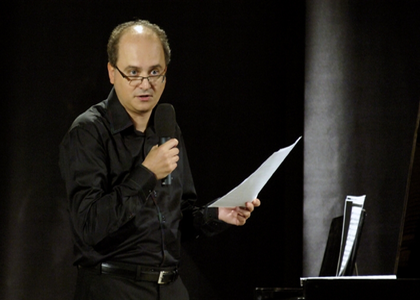 During the George Enescu Philharmonic season, there are held on Thursday and Friday, 1 and 2 March 2018, from 19:00 hours, two concerts directed by Camil Marinescu. The Symphonic Orchestra of the institution will perform the Concert for violin, flute and string orchestra signed by Johann Sebastian Bach and Symphony IX by Franz Schubert. The programme also includes a work composed by Dan Dediu, Plastic - Rock Concerto, for violin, flute and string orchestra. More details about the work, but also about other projects of the composer, from the following interview.

On Thursday and Friday, the Philharmonic Orchestra of Bucharest performs a work that you sign, the Plastic-Rock Concerto. For those of us who will hear it for the first time, how would you describe this work?

It is a work that I wrote 10 years ago, at the request of the flutist Ion-Bogdan Ștefănescu - who, he also resumes this work at the Athenaeum - not only for the flute, but also for the violin. It is, therefore a double concert, that starts from the idea of transferring some of the features of rock music in the field of symphonic music. The characteristics of rock, timbral, as I see them, are the use of guitars and percussion. My bet was to use a more or less extensive string orchestra with two soloists - flute and violin - and to succeed in this music to stylize rock music in a special way without using its specific ingredients which we talked about earlier, not the guitar, nor the percussion. This meant that I had to think a lot about the organization of the heights, the rhythmic organization of the speech, and I hope it has succeeded in something like plastic (because "rock" means stone). What I did was a kind of "plastic stone", so I called it Plastic-Rock Concerto. So, a styling of rock music in concert music within the symphonic tradition concerto music.

Who will perform this concert with Ion-Bogdan Ștefănescu, whom you have already remembered?

Next to Ion-Bogdan Ștefănescu will be Gabriel Voicu, at the violin and the whole concert will be directed by my old friend, conductor Camil Marinescu.

Are there other composing projects you are working on at present?

Yes, we have just finished a silent film music that will be played in Israel in two cinemas in March. It is an order of the ICR Tel Aviv, which I have worked with great efficiency and pleasure. This is a silent film from 1930, made by Ion Niculescu Brună and found in the National Film Archive, about Ecaterina Teodoroiu, the heroine from Jiu. A combination of documentary and artistic film ... It was a great pleasure for me to write music only for two instruments, violin and piano. As I said, this work will be presented at the first hearing in Holon and Jerusalem by the violinist Diana Moş and the pianist Adriana Maier. Now I'm heading for two orchestras plays, I'm already working on Symphony V and I'm in the project for a new orchestra play - Levante - for the National Youth Orchestra.