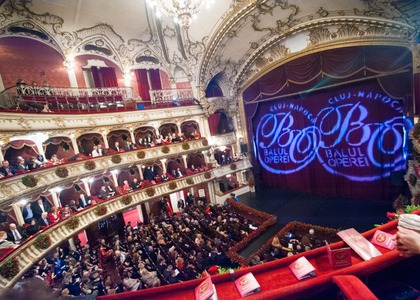 Every year, the Romanian National Opera in Cluj-Napoca organizes the Opera Ball, an event long awaited by the audience that will take place on March 3rd 2018. It will be "a truly Viennese ball", says the press release drafted by the creation team that puts together Tiberiu Soare, director Mihaela Bogdan and Petre Năstase, production designer Anca Pintilie and choreographer Pavel Rotaru. Cristian Avram - Head of Marketing, Show Organization and Public Relations - spoke to us about the event:

Mister Cristian Avram, on the 3rd of March you invite the audience in Cluj and others to one of the most awaited events of the year - the Opera Ball. It says in a press release that the theme of the ball is connected to national identity in the year of the Hundredth Anniversary of the Great Union.

This year we have a special edition of the Opera Ball, with a thematic that is purposely connected to the Hundredth Anniversary of the Great Union; to be more specific, it's about this unity in diversity that the European Union keeps talking about. We want to promote the physical and spiritual values born within our territory, but at the same time we are proud to be part of this community called Europe.

This year, the special guest of the ball is tenor Ștefan Pop, the tenor that makes us proud to be Romanian everywhere in the world, from Japan to the United States, going through all the great opera houses. The other singers are the singers of the establishment - Carmen Gurban, Diana Țugui, Iulia Merca, Hector Lopez, Sorin Lupu, Simonfi Sandor. We also have some young singers from our opera studio - Larisa Ștefan, Victoria Cormoș, Andrei Manea, Andrei Nicoară. They will be accompanied by the Orchestra of the Romanian National Opera in Cluj-Napoca, as well as by soloists from the ballet ensemble of our opera house.

And the baton was entrusted to Tiberiu Soare.

Yes. He is one of the conductors dearest to our opera house. I explained him the concept, he was delighted and agreed to take part in the project on the spot, however experimental the project actually is. As I was saying, it's the first time that the Romanian National Opera House in Cluj organizes it, until now we were only partners of the project. Starting with this year, it becomes a production of our opera house. We're trying to fundamentally change the arrangement of the hall; we are building a platform that connects the stage to the hall, thus transforming the entire hall of the Romanian National Opera in Cluj-Napoca in a ballroom.

There will also be some awards.

We're happy to invite you to this absolutely special edition of the Opera Ball in the year of the Hundredth Anniversary of the Great Union with the classical wish of "alles walzer" and an invitation to a waltz on the stage of the National Romanian Opera House in Cluj like you've never seen before!
Interview by Jeanine Costache
Translated by George Arion,
MTTLC 1, Universitatea București
Return to archived Interviews