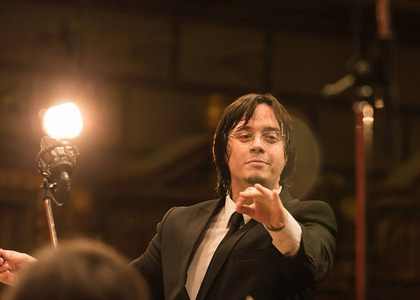 Interview with the bandmaster Gabriel Bebeşelea

This evening, under the dome of the Romanian Athenaeum will have a new event FANTASTIC Opera, a project initiated and moderated by our colleague Luminiţa Arvunescu. In the Great Hall you will be able to listen for the first time to Musica Ricercata ensemble - the first Baroque music orchestra set up by a Romanian bandmaster, Gabriel Bebeşelea, who will be at the desk. More things learned from the artist:

Gabriel Bebeşelea, under the dome of the Romanian Athenaeum, propose the project LA LUMIÈRE COMIQUE, a new event from the Opera FANtastica series
. You come with many new surprises, with a new orchestra with a great program. What can you tell us about this project?

It's a project we're starting now. It's called Musica Ricercata. It's actually an ensemble, it's not necessarily an orchestra, an ensemble that aims to promote both old music and also new music. And the first concert in this Musica Ricercata project is Comeque La lumiere, fragments of works, rather ballet comedies composed by Lully with Moliere, Charpentier with Moliere, Rameau with Voltaire.

As far as I understand, the promotional materials will be musical fragments that you have transcribed, you've brought the musicians to the front. You did a research job.

Yes, it took more than a year for my research. There are manuscripts of these works. For example, La Princesse de Navarre, Rameau's work in collaboration with Voltaire is a premiere in Romania. It has never before been played.

So we will have many surprises. Talk to us a little about the ensemble you founded. It is an atypical one for Romania.

Yes, it is an ensemble that includes young musicians from Romania and abroad and, as I said, is the desire to promote these lesser music made to us or to say less music.

Of course, she will accompany you on stage, a frequent collaborator of yours, soprano Rodica Vica. How is the reunion on stage with her?

As ever, it is an absolutely wonderful collaboration, because we align very well and even from the beginning, let's say, the archaeological excavations in the baroque field, we collaborated in several projects.

Finally, what other projects do you have for the near future?

Just the day after the Ateneu concert, together with the recruited music, we will go to Budapest, the old music festival there, in the new and beautiful Mupa Hall, and then to follow a series of concerts for me at the Cluj Philharmonic Orchestra , at the National Radio Orchestra afterwards. In Russia some concerts. Several projects until the end of the season.