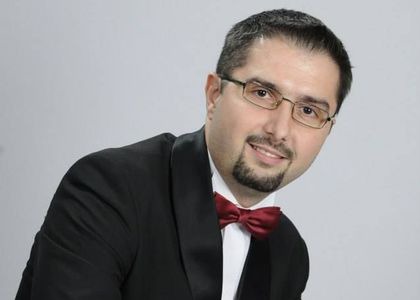 Interview with Ciprian Ţuţu, conductor of the Academic Radio Choir

Your concerts are always structured around an idea - two ideas in this case: first, the celebration of Easter and second, the blending of a cappella with the symphonic vocal repertoire. How did you structure the program?

We will perform on Wednesday, 14th of March. It is a period of preparation for us, a Christian country par excellence, and music is the means of bringing us closer and easier to God and I suggested the music related to Easter, the feast of the Lord's Resurrection, as a general theme for this concert. I suppose it will be something new, in the first part of the program we will have nine religious a cappella pieces from the Romanian and the international repertoire and in the second part the choir will perform vocally and instrumentally.

What a cappella pieces will there be in the first part?

A gradual by Bruckner, Osi Justi, then Crucifixus, the excellent motet of the contemporary composer Antonio Lotti, Ubi Caritas de Morten Lauridsen... There will be also a piece that inspired by a poem called Resurrection (Înviere) written by the late composer Dragoș Alexandrescu, a piece that is not generally performed, which is why we want to present it to the public.

Can romantic and contemporary works be played in the same concert? Does the audience agree with this?

I think a more diverse program can only draw the attention of the audience and make it focused on what is happening.

Who are the soloists you will be collaborating with?

In the first part we will have soloists from the choir, namely our sopranos Olga Caia and her sister, Claudia Caia. There will be our arrangeur himself and our colleague, Dan Stoenescu, who will play the piano. We have a piece by maestro Nemescu, Salve Regina, in which our colleague, Simona Săndulescu, will play the organ, and for the second part we will have guest soloists.