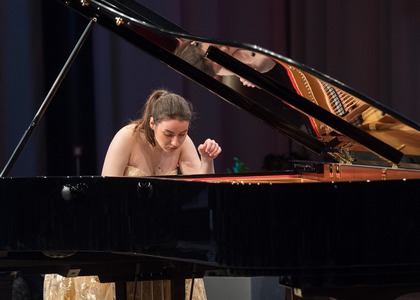 The young pianist Adela Liculescu is the winner of the contest "|Prix du Piano", that took place on February 18th, 2018 at Kursaal, in Bern, capital of Switzerland. A student in her last year at the University of Music in Vienna and winner of many international contests, Adela Liculescu presented a programme with pieces by Frédéric Chopin, Georges Bizet and Franz Liszt. Other pianists took part in the contest's 11th edition, such as: Igor Andreev from Russia, Mackenzie Melemed from the United States of America and Dong-Jun Miao from China.

Congratulations on your success! Two days ago you were awarded 1st prize at the
Prix du Piano Contest in Switzerland. Could you, please, first tell us what the contest was about?

Thank you very much for your congratulations! It is a very special contest as there are only four pianists invited each year. So, there are many applicants for this contest but only four are chosen, and all four pianists perform in one night. Actually, it is a concert, and the audience votes for the winner at the end of the contest. Basically there is no jury, it is an audience prize.

Which are the criteria one must fulfil in order to be invited to perform in such a contest?

I knew that once I registered for this contest, I had to send some video recordings along with my registration form

What does this prize mean to you and what advantages do you think it might bring you in the long run?

First of all I am extremely honoured to be awarded this prize and for the audience's trust. Of course, after being awarded with this prize, I will be invited to perform in different concerts, but for the time being I cannot give too many details as nothing is sure yet.

Apart from these I am sure you have other projects, too. Could you, please, name a few of them?