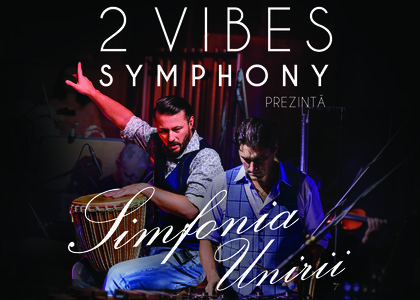 2 Vibes Symphony is a unique project in Romania: the duo is comprised of Ciprian Rogojan, who graduated from "Gheorghe Dima" Music Academy in Cluj-Napoca, founder of the band System, who also won third place at the Eurovision contest in 2005, and of Alexandru Anastasiu, with a PhD in music, percussionist for the National Radio Orchestra, winner of the Yamaha scholarship and organizer of the first International Vibraphone Festival, having his name written on the famous Mike Balter mallets.

Along with 2 Vibes Symphony, the Radio Chamber Orchestra and the Radio Academic Choir, some exceptional guests will be performing on the stage of Radio Hall: soprano Irina Baianţ, flutist Ioana Turcu and trumpeter Horaţiu Boşca. More detail in the following interview:

Mister Alexandru Anastasiu, this week, you will be once again presenting the 2 Vibes Symphony project at Radio Hall, a concert that you have also performed last year. How did the audience receive it?

It has been a tremendous pleasure to, first of all, have a sold out show - we hope it will be the same situation this time round, we have very few tickets left. It has been a pleasure to perform this entire varied and beautiful program and I do believe that the audience has also perceived it the same way, receiving a positive feedback from their behalf.

How do you see your collaboration with Ciprian Rogojan and conductor Constantin Adrian Grigore?

I have been friends with Ciprian Rogojan ever since we used to go to the music national contests, and with maestro Costin Grigore as well, I have known him for a long time, and it is always a pleasure to collaborate with the people that are closest to you.

At Radio Hall, you will also be performing some of your own creations. How would you describe the style of those compositions?

I think the best description was the one offered by the audience itself, which placed my creations into a movie soundtrack area. In general, I enjoy composing music in a more, let's say, programmatic manner. I start from one idea and then i try to remember more key elements of that certain concept through music.

What other pieces will you be including in your repertoire?

We have a variety of music pieces in this repertoire because, for this concert, we are talking about "Simfonia Unirii". We have "Mociriţa cu trifoi", a traditional piece. We have also composed a piece in Romanian style by the name of "Ritmos", and it is dedicated to my colleague Ciprian Rogojan, who will have a solo part in this piece. We also have Metallica's "Nothing Else Matters", Sting's "Fragile", Chick Corea, Fiesta and many others.