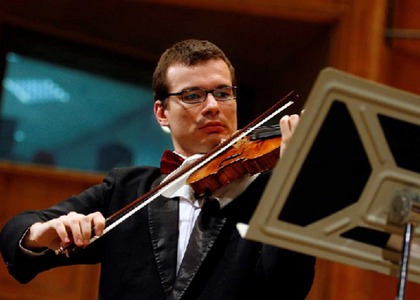 Alexandru Tomescu is the soloist of the National Radio Orchestra

Tomorrow, April 5th, 2018, violinist Alexandru Tomescu will take the stage at Sala Radio (Radio Concert Hall) where he will be performing as soloist. He will play the Violin Concerto in D minor, op. 47, composed by Jean Sibelius. The evening led by conductor Naoto Otomo will be completed with Triptyque for chamber orchestra by Yasushi Akutagawa and with Antonin Dvorak's Symphony no. 8 in G major, op.88. The concert will start at 7 PM and there will also be a live transmission on Radio România Muzical radio station. The following interview contains our discussion with Alexandru Tomescu.

This week you are performing again alongside the National Radio Orchestra, and for the Holy Week you have chosen Sibelius' Concerto for Violin and Orchestra. In what way is this opus special to you?

Sibelius' Concerto is a composition I am particularly fond of because it is the concerto I have performed in important competitions which I have won and the first which comes to mind is George Enescu International Competition in Bucharest or the Marguerite Long- Jacques Thibaud Competition in Paris. Of course, I have played this composition in numerous concerts in Romania as well as abroad, but it is tied to many of those competition memories, to those years of perfecting my technique, to the friendships I built back then, to my professor, maestro Ştefan Gheorghiu...So this concert has a deep emotional charge. Regarding the musical aspects, apart from its emotional charge which is tied to music, I had the chance to be a member of an important quartet in Romania and it was then that I discovered a quartet composed by Sibelius which was quite beautiful, and which at that time seemed to me that it surpassed his concerto in terms of emotional charge. But now, as I come back to this score, I think we should render unto Caesar the things which are Caesar's and that is the fact that Sibelius' concerto is probably his most important violin composition.

The orchestra will play under the baton of Naoto Otomo. Will this be a first-time collaboration?

Yes, it's our first time working together, and I am sure this will be a top-line collaboration. I have heard only great things about him.

Next week you are invited to participate in a project entitled Mentoriada. I kindly ask you to tell us a bit more about it.

It's a about a series of less formal meetings, less conformist, which will be held at the Cărtureşti bookstore. It is an initiative which strives to get together young potential entrepreneurs (who are active in various domains, especially in cultural ones) and artists - people who have achieved some experience in this field. I have received this invitation quite recently and I was very happy, because I always like to discuss and tell young people about how things were a couple of decades ago, to help them be mindful of the huge advantages they have which benefits all of us nowadays.