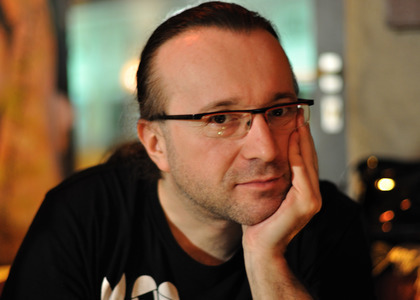 Berti Barbera is the soloist of the Radio Big Band

The Radio Big Band conducted by Ionel Tudor invites its audience to a concert that will take place at the Radio Hall on Thursday, April 19, starting from 19.00. The event is called the Big Band Boom and features Berti Barbera in the leading role.

You are the soloist of the Radio Big Band concert, which you called the Big Band Boom. What is it all about?

What will you be playing?

American blues boogie rock'n roll repertoire, which has always been my clear intention. I've done my thing - selfish as it is, I admit - of singing with the orchestra. It's a unique sensation and I rarely feel it. It's the idea of working with professional and outstanding musicians. But above all it's my desire to see universal music - in our case, blues - played on large stages by public orchestras, or in public institutions. This is proof that we care about history, about the present, about the musical phenomenon which for some of us is, after all, a means of earning a living. We have to be fair and even respectful with regards to this huge fount of inspiration that we also tap into. So, my idea is to promote this music at the level of a public institution. I would like to hear blues at the Radio Hall, alongside classical and jazz music. In a band it's easier, because there are fewer people, the mechanisms work just like in the case of a handball team facing off against a rugby team. Both work, both have their own dynamic, but we can't compare their scope, complexity, and force, even if both are undoubtedly extremely interesting. A combo is more flexible, it depends on the agreements between its members. The orchestra needs a conductor who coordinates, who is the hinge between the orchestra and the soloist. I sometimes feel the urge to conduct and I have to refrain myself from doing so. It requires a completely different behaviour and a superior attitude, given the necessity to maintain a balanced communication with several people at the same time.