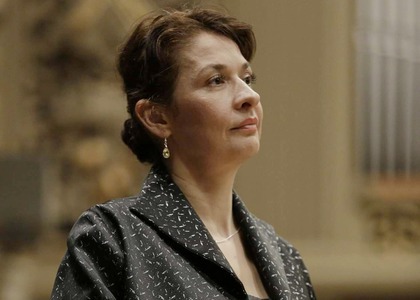 An interview with Luminita Gutanu about the Symbol Choir’s tour

Tuesday, 24th of April 2018, the Children and Youth Symbol Choir led by Jean Lupu will perform on the stage of the Romanian Athenaeum, at 7 PM. The event will take place with the direction of conductor and founder of the ensemble, Jean Lupu who will be assisted by conductor Luminita Guțanu Stoian. The concert is dedicated to the Centenary of the Great Union Day and it represents the beginning of an extensive tour, which will carry the young artists throughout the country, at Târgoviște, Pitești, Râmnicu Vâlcea, Slatina, Craiova, Brașov, Sibiu, Alba Iulia, but also Brussels. Conductor Luminița Guțanu offered us the details regarding this series of concerts:

What sparked the idea to make this tour and how is it going to be structured?

The idea blossomed as early as autumn last year. Together with preacher and Professor Jean Lupu we decided to hallmark this event with a series of concerts which is what we know best. And thus, we decided to organize this national tour, naming it Singing the Great Union's Centenary. There are pieces which conjure Romania's history. We also have religious anthems and, of course, traditional folk music. We have chosen well-known pieces, which are beloved by devoted fans of choir music, but we also have pieces which we will sing for the first time. Our audience expect us to launch at least one completely new choral production at every concert.

Apart from the concerts, the choir will also be singing the Liturgy in churches during this tour. Is this a custom of the Symbol Choir, to combine concerts with the interpretation of the Liturgy?

You made a good remark here. It is a custom. Before a meal, you offer a blessing and after the meal you also offer gratification. It is a manner of presenting our thanks for all we manage to achieve. And Symbol is the first and only choir of children and youths which interprets the Holy Liturgy for four voices. The children are very involved and delighted with this tour and this can be see by the way they act and the way they sing this repertoire.

You will conclude this tour with a concert in Belgium. What can you tell us about this concert?

We are giving this concert with the help of the Belgian-Romanian Alliance led by Mrs. Ecaterina Evanghelescu. During this time span we will have a series of concerts in Brussels, as well as in the rest of Belgium. We will be travelling between the 29th of November and the 4th of December, and, obviously, we will be singing the same repertoire dedicated to the Centenary of the Great Union Day. In fact, on the 1st of December we will be in Brussels.