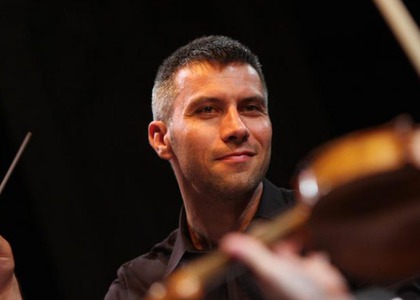 The "Calea Victoriei" Foundation organizes the concert I love Tchaikovsky, performed by the Symphactory Orchestra on Monday, May 7, 2018, in the Studio Hall of the Bucharest National Theatre. The soloist will be the young pianist Mihai Diaconescu, and Tiberiu Soare will be conducting. We spoke with Tiberiu Soare and he had this to say.

This is the third concert in the I love classics series that you are conducting. Why Tchaikovsky, after Mozart and Verdi?

Obviously, the order of the picks doesn't have a plan behind it. We simply choose musicians, composers, artists who have touched the way we have been studying and making music. I speak on behalf of myself and the musicians in the Symphactory. There are composers we are very fond of and truly love. It's about declarations of love towards great musicians and composers. This year we chose Tchaikovsky because we don't need a certain date, we don't need - let's say - a round anniversary. Had this been the case, I think we would have opted for Debussy, for instance, because 2018 marks one hundred years since his death. But we didn't need such criteria. It's Tchaikovsky because we like him, Tchaikovsky because we are certain the audience will like him a lot too and Tchaikovsky because he speaks our language, the language of musicians who absolutely love what we're doing.

The soloist will be a very young pianist. What can you tell us about him? Have you ever performed together before?

No, it's our first collaboration, but this is exactly what we at the Symphactory want - that is, to welcome young musicians and Conservatory graduates, to help them meet the audience and be on stage. This was the idea the Symphactory Orchestra is based on, so we follow this line. We are consistent.

How did you come up with the program?

The program was, of course, cantered around the solo piece, since we are to perform the Concerto no. 1 in B flat minor for piano and orchestra. We automatically thought we needed a symphony, or a large suite. We stopped on the suite from Swan Lake - I admit, due to the intrinsic musicality of the music, of the score. It's an extraordinary score. I've had the opportunity of conducting it several times, even in the orchestra pit of the Bucharest Opera and I thought it would be great to have this piece in a concert - it is evidently meant to accompany the ballet, but it's so well written it can stand on its own. The fantasy-overture Romeo and Juliet came as a rather natural addition because it's about a declaration of love and, after all, we are talking about maybe the most famous pair of lovers in the history of music. The way Tchaikovsky knew how to transpose the emotions from Shakespeare's text to music is, I think, unparalleled. It's extraordinarily beautiful. We're not talking about a purely romantic beauty that could appeal only to feelings, but it also invites us to think. It's a meditation, especially if we think about the introduction, the introductory theme of the overture. It's a meditation on the havoc that intolerance and hate can wreak in our lives.

Finally, I would like to say that, also in May, Sandra Ecobescu invites you to talk about Inspire Me. What is it about?

The dialogue will take place on May 19 in the building of the "Calea Victoriei" Foundation. It's a rather relaxed meeting between a potential audience and a musician. It's a meeting that resembles a confession. Basically, the musician meets the audience of the conference and I will simply try to tell them how a musician sees the world. It's that simple. Nothing complicated, but it's obvious there are many potential ramifications to this type of conversation with an audience.

Of course, musicians express themselves through their art, but from time to time I think it's very good for them to enter a spoken dialogue with the audience, who might have certain expectations, maybe certain curiosities. In fact, that is why I can assure you that there are many questions regarding the details in the life of a musician - in my case, of a conductor. But the audience is curious and if we somehow come to meet this curiosity through a relaxed dialogue I think it can only be beneficial for both sides, both for the artists and the public.

On Monday, May 7, 2018, starting from 19:00, the concert I love Tchaikovsky can be heard live on Radio Romania Music.