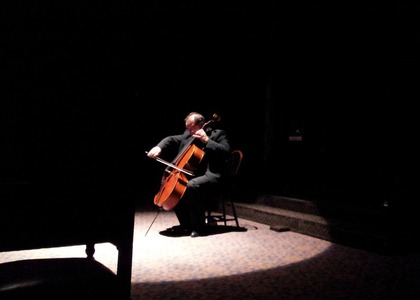 Cellist Anton Niculescu and pianist Bruno Canino will perform on Tuesday, 7th of May 2018, on the stage of the Romanian Athenaeum's Grand Hall. Below you can find out more about what Anton Niculescu had to say regarding the program of the recital and his collaboration with Bruno Canino:

The great pianist Bruno Canino returns to Romania. Sure, we have known each other for many years, ever since we were at La Scala in Milan. He had a long collaboration with the Scala Opera Theatre and we have known each other for forty years. We collaborated in Switzerland, in Austria and he has been our permanent guest in Brașov and Bucharest for almost 10-15 years; during the festivals in Brașov, and especially during the musical soirées. It's the same in Bucharest. He will also come this Summer in July - we are at the 4th edition of the "
Marile serate muzicale" Festival (great musical soirées). And this time the event will take place at the Romanian Athenaeum, on Tuesday, 8th of May, at 7pm.

There will be an entire program dedicated to Johannes Brahms. Why did you choose the music of this composer, and what exactly will you perform?

We will perform a piece for violin and piano, which is Scherzo FAE - a personal transcription (the original score is for violin and piano). It sounds very good played on the cello as well and, of course, we will also play the two cello sonatas by Johannes Brahms - Cello Sonata No. 1 in E minor Op. 38 and Cello Sonata No.2 in F major Op.99. Why Brahms? Because Brahms is one of my favourite composers.

I invite the public in Bucharest to see Bruno Canino again, and to listen to Brahms's music in the atmosphere of the Romanian Athenaeum.

And since you spoke earlier about Brașov: the Brașov Philharmonic celebrates this year 140 years of existence. An anniversary concert was already held on the 3rd of May. However, I would like to ask you more about the upcoming projects that are to be executed before the season ends, and about the projects related to this anniversary.

There have been projects in this regard that have been executed. The great pianist Leonskaja was in Brașov. There were international violinists present there - Japanese, Americans, Russians, Romanians. Soon, Dan Grigore and Misha Katz will return to Brașov after so many years. They always play together. Dan Grigore will perform the Emperor Concerto by Beethoven. For almost a year and a half, we offered pianists exceptional conditions - a new hall and a new Steinway piano - and it is exactly in these conditions that Dan Grigore can come and perform. This is because he refused to return to Brașov because of the piano. The Mendelssohn Medallion is going to be something very important. In the first part of the concert we will perform family works of the twentieth century and the concert will finish with the Italian Symphony by Mendelssohn, conducted by the maestro Ilarion Ionescu-Galați.