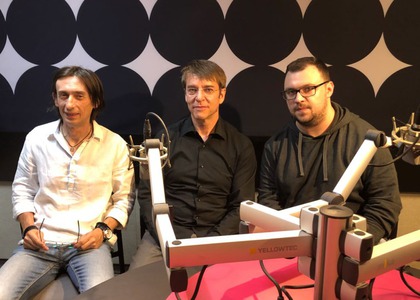 Ladies and gentlemen, I have the pleasure to talk in the Radio Romania Music studio with the conductor Stefan Geiger, who will conduct the National Radio Orchestra at the Friday evening concert.

You are for the second time conductor of the National Radio Orchestra, how did you find the orchestra at this second meeting?

I am, indeed, for the second time in front of the National Radio Orchestra. It seems that I am invited only for special occasions. I remember two years ago we made a special project with the Ripples Night.

Last time you conducted an oustanding musical and cinematic event, it is about the Ripples Night, the silent movie, synchronized with the music of Richard Strauss. How did you feel the public attending this concert?

The audience was delighted. It seemed like an interesting project, and the synchronization of what they saw on the screen and what they heard at the Radio Hall was a great experience for them.

I will offer a musical respiro to the conductor Stefan Geiger, but also to the listeners; it is about a song from a video game, led by Stefan Geiger at an event in Germany German Game Music Awards, in 2014. What is this event? What can you tell us about this event?

I am glad you are talking about this project because I really like it, I take part in it with all my heart. I am not only conducting film music, but also game music, I have a full conducting activity. What I am doing now is more a hobby. My friends told me about this a while ago - they know I am, usually, a very curious man - and they brought me into this world of game music, not the music of the 80's that is not music, there are only a few sounds.

The recording I've heard earlier is a very good example for what the German game music competition is about because until 2011 I was not so connected to this phenomenon, I was not very interested in what the game music means. With this project I was even more interested and I succeeded to attract in the project also young composers, three of them for each edition in 2012 and 2014 - composers that are working now in this game music industry.

What could you tell us about the program of the Friday concert? Why Game Music Concert?

We will have two parts at the concert on Friday. One example is SIMS, from which I have just listened the music. Other examples are Super Mario and Angry Birds. We listen this music, obviously, only on smartphones or the gamebox or on any other device we can play on; it is a simple music, but if these themes have the right orchestration, if they are put on a score for a symphonic orchestra, as it should be, it is clear that the public will enjoy them. In the second part of the Friday concert, with the help of the video projections, we will listen to music for the first time, music written now for the new games - obviously fragments of that music. A famous youtuber from Germany will be on stage and play on the music of the Super Mario game.

Last November it took place at the National University of Music in Bucharest a Game Music workshop, held by you together with the composer Dominik Schuster, the winner of the 2012 German Game Music Awards. How was the meeting with the young Romanian composers?

I enjoyed the meeting with the young conductors, the overqualified musicians and the very good, very warm people.

At the concert on Friday you will perform some works selected from this workshop. Is it true?

At the concert on Friday we will play music from that workshop. We have three well-trained musicians who attended it.

I could also nominate them - Bogdan Pintilie, Ionuț Teodorescu and Victor Filip.

We want to present them on Friday evening concert. There are well-trained musicians and we were glad we met them.

What's next in your concert agenda after Friday evening?

After the concert on Friday I will go to Brazil to conduct the Parana Symphonic Orchestra, and the program there will include movies' music alongside Messiaen's work. Look, I am passionate about the film music.

I wish you good luck for the Friday evening concert at the National Radio Orchestra desk!