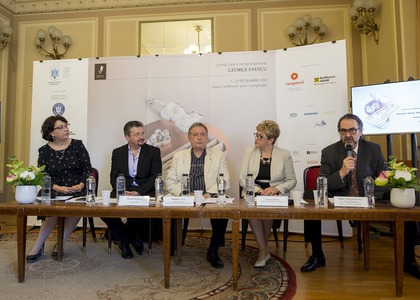 Tickets will be available for sale at the beginning of May.

The 16th edition of the George Enescu International Contest (between 1st and 23rd of September 2018) has a record number of youngsters enrolled in the competition: 400 young musicians from 46 countries of five continents. With an increase of 26% compared to the 2016 edition, the Enescu Contest has a remarkable Romanian presence at this edition, with 72% higher - in total 36 Romanian youngsters registered mainly at the Piano Section. Compared to the 2016 edition, China and Great Britain doubled their participation in the competition, whereas Italy tripled the number of young musicians enrolled.

There were in total for the four sections of the 2018 Enescu Contest 126 contestants at the Paino Section, 121 at the Violinn Section, 126 at the Cello Section and 27 at the Composition Section. 212 participants are from Europe and Middle East, 148 from Asia, 29 from North America, 9 from Australia and New Zeeland and 2 participants are from South America. Statistically the most present countries are South Korea - 70 participants, Romania - 36, China - 33, Japan - 26, Russia - 22, Italy - 21 and USA - 20. At the Paino Section the Romanian participation is the second largest presence after South Korea, represented by 28 participants. France has the largest participation at the Cello Section, also after South Korea which, excepting the Composition Section, has the most participants per section. At the Violin Section, the second largest presence belongs to Japan.

"Starting from what George Enescu said, I would add that music represents 30% excellence and professionalism and 70% message. In the nowadays world, when the geopolitical context is so complex, classical music has the power to unite by power of example. Different nationalities come together to sing in an orchestra or in a choir - and thus have to suspend all the conflicts and the problems because if they don't, it is impossible to sing together. Music will never abandon you, it will not betray you because music means harmony and peace. I think artists, musicians can spread this message of peace, cohesion and this is what we have to share with the young musicians. There is always hope, we have only to invest in it!"
, said the Art Director of the Enescu Contest and Festival, conductor Vladimir Jurowski, in a special intervention via Skype from Berlin, during a press conference marking the opening of the 2018 edition of the Enescu Contest, on 25th of April, at the Romanian Athenaeum.

"It is a great pleasure for me to be part of this structure that has both tradition and history. I am convinced that the prestige and the mark of the Enescu Contest and Festival mean a lot not only for the Romanian artistic cultural life in Romania, but also in general for those who know the course of this event. From our point of view, as partners, we will ensure that all things go well, as it is appropriate for such an international event", stated Mădălin Voicu, state secretary of the Minister of Culture and National Identity.

"The Enescu Contest celebrates 60 years since its founding. We are very happy to have a record regarding the participation: there are 400 participants registered for the four sections of the Contest and we are sure that not only the number of the participants is decisive in this edition, but also their skills - there are contestants that have received great international awards and whom we will have in the Enescu Contest. We will open with Gabriel Bebeșelea conducting the vocal symphonic work, which was awarded at the last edition of the Contest", pointed out Mihai Constantinescu, Executive Director of the Enescu Contest and Festival, at the press conference.

"For this edition of the Enescu Contest, we will broadcast live through our two radio stations, Radio România Cultural and Radio Romania Music, the gala concert and the Orchestra Finals and we will record the evolution of all the participants starting from the 2nd Stage and of the artists invited to create a dedicated series.", declared Liliana Staicu, director of Radio Romania Music.

"The Enescu Contest together with the Enescu Festival is, indeed, one of the largest cultural events we organize and as a national public boradcaster, this is part of our strategic direction. The Romanian Broadcasting has been sustaining the Enescu Contest since its first edition in 1958", said Mircea Neacșa, manager of TVR 3.

"Discover the talent. Applaud the effort. Catch the emotion"

At the 2018 edition and in the year of the Centenary, the George Enescu International Contest celebrates 60 years since the first edition. Starting from the considerations of the great Romanian composer George Enescu, who said that in music you need 30% talent and 70% work, the 2018 George Enescu International Contest seeks to honor the talent and the hard work of the artists, the tedious path to the technical perfection and inspiration in proposing new visions of the interpreted pieces.

The 2018 Enescu Contest has proposed to start a dialogue with the young and the wide audience alike. Starting from the essence of the competition - the different interpretation of each artist, the personal style in deciphering and delivering a score and the richness that enjoying classical music has to offer, the 2018 Enescu Contest will bring to the audience also some music events and workshops, both offline and online, designed to inspire and to unravel the question "What do we hear while listening to music?". The projects will be run from to end of May and will continue during the 2018 Enescu Contest. Details about the project will be offered in the process.

The program of 2018 Enescu Contest

Excepting the 1st Stage of the Contest - the eliminatory one, the other stages and the finals take place at the Romanian Athenaeum.

In order to carry forward the music of the great Romanian composer George Enescu, there will be performed at the 2018 Enescu Contest more pieces by George Enescu, mandatory in the competition - for the Cello Section the Sonata No. 2 Op. 26 in C major (Semifinal) and the Symphony No.8, of their choice, for the Finals; for the Violin Section there will be Ménétrier (the fiddler) - the opening episode of Impressions d'Enfance op.28, for the 2nd Stage and for the Semifinal there will be a piece at their choice between Sonata No.2 for Violin and Piano in F minor Op. 6 and Sonata No.3 for violin and piano in A minor Op. 25. For the Piano Section, the young participants can choose one of the works by George Enescu: Suite No.2 in D major Op.10, Sonata No.1 in F-sharp minor Op.24 or Sonata No.3 in D major Op.24.

Starting with the 2014 edition, the George Enescu International Contest is organised as a self-standing event with the participation of the public. With a remarkable international reputation, the Enescu Contest is member of the World Federation of International Music Competition și al Alink - Argerich Foundation - Piano CompetitionWorldwide. The total value of the 2018 prizes is of 115.000 euros, plus master classes offered by the jury members as well as special prizes.