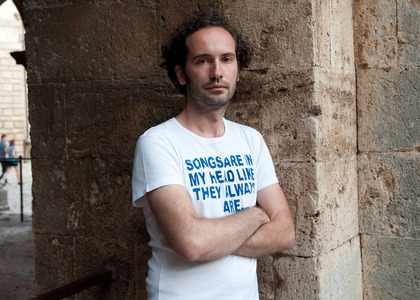 So, it looks like the second workshop from SoNoRo Interferences 2018. How has it been until now?

We ended an amazing week in Montepulciano, Toscana, at the end of March and we started the second workshop a the fortress, by Danube's shore, which seems calmer than ever and you know, as Mircea Dinescu said, cranes sing in three languages, so the atmosphere is very good and especially very good for creativity. There is music from dust until dawn: Beethoven, Schubert, Brahms, Enescu.

It's an intensive work week, so we work from morning until evening, and on Saturday there will be the final concert, as usual, in Portul Cultural Cetate. We expect a lot of people from the area as well, and from Bucharest too, people who come to listen to the results of this work week with the SoNoRo scholars.

Who are the teachers working with the students?

We have again among us Diana Ketler, the pianist from the London Royal Academy and the artistic director of the SoNoRo festival. As for the violin, we have Cristoph Wyneken, a great German professor and chamber music violinist, and for cello, the German Justus Grimm from Bruxelles. I play the viola, and so, the team of experts is complete with me.

How do you assess this year's level?

Overall, we granted 36 scholarships, so 36 youngsters, with ages between 14 and 26. Here, at the fortress, we have 13. The level is very good. This year, we had one of the best, let's say batches of youngsters who applied for the SoNoRo Interferences scholarships, and as a first, this year we had six extraordinary cello players. SoNoRo Interferences is at its 12th edition. Over 300 young people have been part of this project and the fact that we have one of the best candidates is very satisfying and basically turns this wish of ours into reality, that of recreating a young, powerful musical elite in Romania.