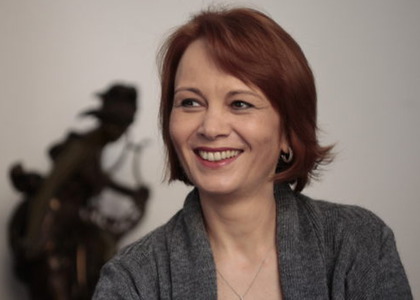 Valenta Sandu Dediu, rector of the New Europe College and one of today's most important musicologists, accepted to have an interview in which she told the listeners of Radio România Muzical radio station something about the projects currently in work at the institution she presides, but also about some of her personal activities.

Valentina Sandu Dediu, the New Europe College organizes the conference "Stalin's Playlist", which is a rather different event. What can you tell us about it?

When I invited Marina Frolova Walker to give a lecture at the NEC, I knew she would come up with a catchy name for it. She is a very successful musicologist, she graduated from the Moscow Conservatory, then in the 90's she settled in the UK, where she married a musicologist, and she is currently a professor at the famous Cambridge University, at Claire College. Her main field of work covers Russian and Soviet music. In recent years she has shifted her focus to the 20th century and to Soviet music and has written a book on Stalin and music, among other things. Basically it's about the great state prizes offered by Stalin, which could reflect, let's say, his musical preferences, more or less than we would have expected. I think this is what she'll talk about at the NEC, of course I think she came up with a title that's not even journalistic, it's exceptional! I'm certain her lecture will be on the same level, because she is a person who knows how to communicate and chooses her methods and examples very carefully. I've heard her in other lectures as well. She is dynamic, and I think the subject will be interesting too. Musicologists around the world are more and more interested about the link between musical creation per se and ideology, politics, social situation, the history of the 20th century - so this is where we stand.

There was a very good reaction on social media regarding the event. What other music-related events are you preparing at the NEC?

This lecture is also the first step in a rather long-term collaboration between the National University of Music and the New Europe College, a collaboration that will run for several months, until the end of the calendar year. It's about a research project won by the National University of Music in Bucharest that will partially take place at the New Europe College as well. It's about advanced research and the internationalization of research. Like I said, this lecture is a first step, and in autumn, in October, we will organize - Mister Nicolae Gheorghiță and I - an international colloquium on the subject of "the musics of power". Things are falling into place, I can tell you right now that we will be joined by one of the world's greatest musicologist, Richard Taruskin, as our guest alongside other important names for us musicologists and musicians, but during this symposium the honorary speaker will be Richard Taruskin.

We shift our focus a bit more on the musicologist Valentina Sanda Dediu - you have recently been awarded the title of Doctor Honoris Causa by the Gheorghe Dima Academy in Cluj-Napoca. Tell us a bit about this experience.

It was a huge surprise. Please believe me that I'm not using any false modesty, it truly was a huge surprise for me when my colleagues in Cluj sent me the invitation. Of course, I felt honoured. You know this title is usually awarded at older ages - not that I'm young anymore! - but I was so happy, because it means that the work I do as a musicologist is important for other academic centres as well. It was a warm, short, and beautiful ceremony and I was happy to be able to see and greet in the audience the maestros I learned so much from, starting with maestro Petre Zbârcea, with whom I once performed a Mozart concert. I think it was thirty years ago in Sibiu. Or to see maestro Cornel Țăranu or Ștefan Angi, the famous aesthetician, and many other friends, as well as many students. For me it was a great joy, I have no other words to better describe it.

Could you tell us something about the lectures you gave at the end of last month, in the United States?

It just happened. It's a coincidence, it looks like I have a frenetic activity, but in April it really was. I received an invitation from two universities in California. One is the University of California Davis, the other is Stanford, and I gave a lecture on contemporary Romanian music at both. I always have this lecture ready to "export" when I'm outside the country and I carefully selected six examples of music. I always explain to my colleagues the historical, political, and ideological context of Romanian music after 1944. I mention many composers and explain that it's not only these six composers and music samples that are worth knowing, but I have to condense the information for a one-hour lecture. And the six pieces - you could call them "Valentina's playlist" - are, in chronological order (and I would recommend this in any radio show) the Concerto for piano and string orchestra by Dan Constaninescu, the Ritual for the thirst of the earth by Myriam Marbe, the second part, Psalm, of the Symphony no. 2 by Anatol Vieru, Ison 2 by Ștefan Niculescu the Symphony no. 3 by Tiberiu Olah and Capricii și ragas by Aurel Stroe. Of course, I only show very short excerpts and give a short explanation about the systems of composition and their context, but I am always delighted - and it's not the first time - to see all my musician colleagues give outstanding praises to the music they hear and always ask the same question: "how is it we don't know anything about them?"

It's a rather difficult question, but how do we make them known internationally?

We as individuals, and through various activities, can strive to make them known and it's what we're actually doing, I'm not the only one. But it's not enough. I learned this in Cluj as well, because Kalevi Aho, who was also awarded the title of Doctor Honoris Causa, and I found out what Finland does for its culture and music. First of all, it invests a lot of money in this music, it makes an aggressive propaganda in the best sense of the word and I can't help but say, as a side note, that a comparison between Sibelius and Enescu will always favour the latter, but we can't compare Sibelius' international notoriety with that of Enescu. Because, sure, the contest and the festival do a lot in this regard and have managed to put Enescu back in the international circuit, but he still hasn't reached the level that Sibelius is at. I'm really curious if in Finland people study Enescu in 20th century music classes as much as we study Sibelius here. That's the end of the side note. The Finnish government offers grants to important composers, grants for 10 or 15 years, from what Kalevi Aho told me, to stay at home and compose. He has written 17 symphonies, all of them have been performed. The great international Finnish conductors - and there are a lot - schedule their music everywhere. And when this happens, people start to know them, they enter a world circuit and have prestigious publishing houses that promote them as well. I can't teach anyone cultural policies, but it's really easy to see how others do it. Of course, you wouldn't give this state grant to just anyone, of course you need to do a selection and encourage certain musicians. But this would be a first step. The second step is, indeed, this world propaganda. It worked for Finnish musicology, Eero Tarasti was in Cluj too, and he is the leading name worldwide in semiotics. Why? It's because of those reasons, too. Of course he is a respected and honourable researcher, but I can't help but wonder, where are Dinu Ciocan and Antigona Rădulescu who are in their own right on the same level of musical semiotics as Eero Tarasti or Márta Grabócz or any other well-known name.

I know that you always reserve some time for writing. Are you working on something, a new book perhaps?

Right now, it's a painful subject because I can't seem to be able to reserve that time. I have too many projects, both thankfully and unfortunately. The first project on the table is a short, dense, and differently written History of the Bucharest Philharmonic. I'm counting on some young collaborators, because I can't do it on my own. I've promised to do this, and I probably will, because I promised. After that, I have started working with some colleagues at the University of Music at the initiative of Adrian Iorgulescu, the president of the Composers' Union, to elaborate a new book about the history of Romanian music and a new mentality over the course of three years. We won't discover facts and dates other than the ones discovered by established historians of Romanian music, but we hope to change the tone a bit. And the project that is dearest to me, but which stretches over many years from now on due to lack of time, is the one which tries to see how the Romanian musical nationalism of the 20th century fits into the context of European nationalisms of 20th century music in general. I've started reading this and that, but it will require time.