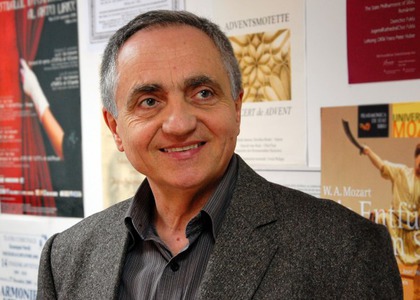 Interview with Ioan Bojin, the director of the Sibiu Philharmonic, at the end of the season

Mister Ioan Bojin, the Sibiu Philharmonic has already announced its last concert of the stage, which will take place today, June 6, 2018, starting at 19:00. Who are the protagonists of the event and what works will we find in the program?

For this end-season concert we have invited soprano Katarzyna Dondalska from Poland and conductor Slavomir Chrzanowski, also from Poland. So there is a Polish team in this concert. The program is quite varied, attractive for the audience, an audience we would like to ease out of the atmosphere specific of seasonal concerts and move them to a more relaxed one, more appropriate for the summer. We will perform overtures and arias from operas, starting with Charles Gounod, music from Faust or Giuseppe Verdi - Nabucco, arias from Offenbach, followed by a series of equally famous pieces by Leroy Anderson, Arthur Sullivan, George Gershwin or Henry Mancini.

I would like to ask you to tell us three things that have impressed you from the current season.

We've had an extremely rich season, a season that has brought on stage many foreign artists alongside famous Romanian artists, such as Remus Azoiței. We've also performed an anniversary concert, with maestro Ilarion Ionescu-Galați at the pulpit of the Sibiu Philharmonic Orchestra.

Could you reveal some of your projects for the coming season?

It will be anniversary season, as next year our philharmonic turns 70 since it was funded. What I would like to point out is an extremely special event during the next season - the Extraordinary Concert during the EU Summit, which will take place in Sibiu on May 9, 2019. For this summit, we will give a concert featuring the Rhapsody No. 1 by Enescu and the Symphony No. 9 by Beethoven. We are currently in talks with the artists that will take part in the event and things are going in a straight line. I think this is one of next season's highlights.