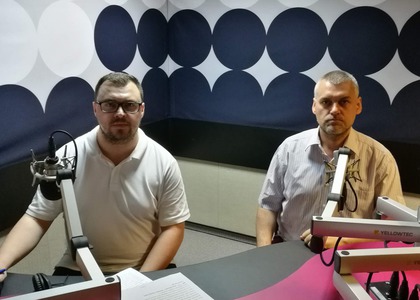 Thursday, 7 June 2018 , ora 12.27
On the 6th of June, Lucian Haralambie interviewed the bandmaster regarding the concert he will be conducting on Friday, the 8th of June, at the Radio Hall.

On the 6th of June, Lucian Haralambie interviewed the bandmaster regarding the concert he will be conducting on Friday, the 8th of June, at the Radio Hall.

I have now with me, in the Radio România Muzical studio, the bandmaster Jozsef Harvarth. Nice to meet you!

You are here to talk to us about the concert you will be conducting on Friday. You will lead the Radio National Orchestra in the second symphony written by Felix Mendelssohn. Please tell us a brief description of this piece of work.

This piece was written in 1840, a year that marked the 400th anniversary since the invention of the printing press by Johannes Gutenberg. Because of this, the city of Leipzig asked for this piece to celebrate this great invention of the modern era, and Mendelssohn wrote this symphony, Cantata - as he would call it based on the Bible - by using the Bible, of course, and Martin Luther's translation - and the motto "Everything that breathes praise the Lord". Therefore, the first text is inspired by the 150th psalm; some texts are inspired by the psalms, some by the romans, some by the written chronical. Unfortunately, it is not well-known piece of work, but it should be sung more often.

I have no idea why it is not performed. It's a protestant type of music based on the protestant chorale; in the 8th part you can even hear a whole chorale a capella that will be followed by the orchestra. What's certain is that this piece of work deserves to be performed, sung and presented to an audience that is eager to hear something new and not the same old performances. I am referring here at Carmina Burana and other vocal symphonies. I think we have to perform less popular pieces as well.

The rehearsals started on Monday. How is your collaboration with the Radio National Orchestra so far?

Like always. We get along really well. We worked hard. Tomorrow, the lead singers arrive; we worked separately with the choir as well. Therefore, we are trying in the next few days to put all the puzzle pieces together and to perform this work of art that doesn't last long; it has approx. 60 minutes. It has ten parts, out of which the first part is the orchestra's symphony divided in tree sections - the Beethoven model - three parts with the orchestra and afterwards comes the cantata part where there are nine sections - with the lead singers, the choir… This sums around an hour of music.

Master Jozsef Horvath, let's talk now about the Radio Academic Choir, a group you collaborated with for the first time in 2011, if I am not mistaken. How was this collaboration? Give us some details about the first days of rehearsals.

Our first collaboration was in 2011, in Cluj, when we organized at the Hungarian Opera the Franz Liszt festival - it was Liszt's 200th anniversary - and at the end of the festival we sung for the first time in Romania The Legend of Saint Elisabeth with the Hungarian Opera Orchestra and with the Radio Choir. That was the first time I worked with them; a team that is very eager to learn something new and that has not been performed before. Now they are just as joyful and eager to sing this new piece and I noticed this will to work and to do great things.

Please mention the three lead singers that will be part of the concert on Friday, at the Radio Hall.

The work is written for two sopranos and a tenor besides the choir. The first voice of the soprano will be Diana Țugui, form the Romanian Opera in Cluj, the second voice of the soprano will be Cristina Grigoraș, from the Opera in Iași. I want to mention that I performed with them three months ago and the Philharmonic in Iași the same piece. And the tenor will be Adorjan Pataki, who is a lead singer at the Hungarian Opera in Cluj.

You are very active in Cluj-Napoca, at the two operas. What are the projects you are working on now?

Next week, at the Philharmonic in Cluj, I will have a concert in which the Philharmonic Orchestra will accompany the students from the Music High School, students which were hand picked for this concert. Afterwards, in the second to last week in June, I will have a symphonic concert that will include rare pieces - apparently, this is what I do now; this includes Iberia de Albeniz which we did last year, here, at the Radio Hall. This time it will be performed in Cluj. And a guitar concert by Castelnuovo Tedesco, just as rare, which we are, of course, honored to perform as this is good music.

Regarding the operas in Cluj, two of the institutions you have been collaborating with for many years now, what do you have in stall for us this summer?

I want to remind people about the Opera Festival in Sibiu that will take place in September, where we will perform Tosca together with the Hungarian Opera in Cluj. The demanded Tosca because it's a famous piece and because the audience is excited for Puccini's music. We use an old setting, but beautiful nonetheless both visually and musically. Besides that, for the next season we want to prepare something rare again, namely La Rondine by Puccini, that has never been sung in Romania. This work will be prepared sometime during the next season, because we were asked to perform it in May, next year, at the Opera in Budapest, as they are doing an entire set on Puccini and his contemporaries and they invited us to come with La Rondine.

Let's get back to Friday's concert which will be held alongside with the Radio National Orchestra. A message for our listeners… How should they prepare for such a piece of work?

Usually, I tell people to come more often, to go to concerts and opera shows as often as possible because live music is way better that recorded tracks and, as it is a sacred, beautiful music, that has a powerful message, I think that they will tremendously enjoy Mendelssohn music… Aside from that, being a rarity, we are welcoming music lovers with open arms. We would love to see them there!