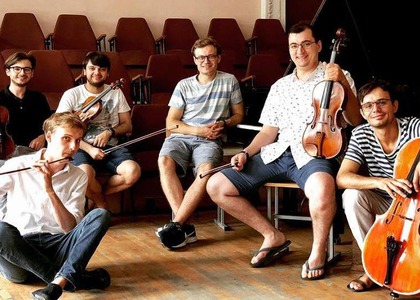 The fourth edition of the Classical Music Festival Moldo Crescendo is taking place in the Republic of Moldova and Romania until July 27. The initiator of the festival, young pianist Marcel Lazăr, offered us some details about the event:

Moldo Crescendo is a project, a festival and a group of musicians which started off four years ago in Chișinău out of our wish to bring home what we have learned across the border. Basically, we returned home during summer and we decided we should play, just like we had learned at the universities where we studied, in order to bring quality chamber music to those who live here. And, just like that, from summer to summer, it became more popular, we saw that people liked it and supported it… and this year, on our fourth edition, we have said we should organise a bigger festival across Moldova's borders.

The tour has already started on Saturday, July 14, in Moldova. On Tuesday night (July 17) you will be performing a new recital and, starting Wednesday (July 18) you will be in Romania. I will ask you to talk about the cities where you will play and the musicians we will be able to listen to.

The tour around Romania will begin in Constanța, at the State Theatre, at 5 o'clock. Then we will go to Iași. From there we will go to Brașov, then Sibiu, then Timișoara and Cluj and finally to Bucharest. All the exact information can be found on Facebook - the place, the time and the date. It's about the Moldo Crescendo musicians; this year there are six of us: two violinists who study in London - Dan Iulian Druțac and Ionel Manciu; a violist who studied and now works in Brussels and Luxembourg - Ian Psegodschi; then, two violoncellists - Constantin Borodin and Radu Croitoru and myself, Marcel Lazăr - pianist. We are already in Bucharest (one of us is a student, another one is collaborating with the Bucharest Philharmonic Orchestra and I am an MA student). During the festival, there is another trio from Bucharest invited - Ludens Trio (Rafael Butaru, Ella Bokor and Iulian Ochescu) and another trio from Lisbon whose members are a girl from Bucharest and two other girls from Spain and Slovenia respectively; I'm talking about pianist Teodora Baldasiu, violinist Celia Jiménez and violoncellist Nika Vremšak.

You have also organized a crowdfunding campaign for this year's tour. Did people get involved?

We organize a crowdfunding campaign every year with two aims. Firstly, to raise the money or part of the money necessary for the festival, but, more important for us, to see whether people want or need something like this. If they do, then they show it by donating even a small, symbolic sum. The concerts in Romania are free entrance shows and this means that you can actually buy your ticket in advance for the price you want. We had many and great expectations, especially since we have organized three campaigns in Moldova and we thought that in Romania, where there is a bigger audience, we will also have greater success. At least this is what we thought. And we have found a lot of supporters in Romania too. In all the cities we visit there are always some people waiting for us, we are optimistic all the time and we try to see the bright side.

We kindly invite you to try to listen to classical music and see how beautiful it is and how much it can brighten your life!