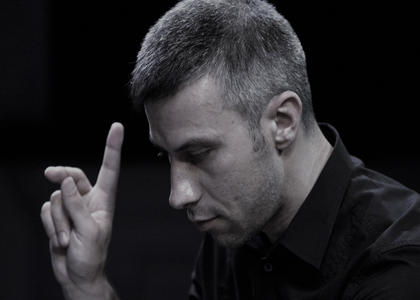 Today, July 23, 2018, Conductor Tiberiu Soare holds an opera conducting masterclass in Jerusalem during the International Opera Festival organized by the Mayor of Jerusalem, which lasts until August 5. With the support of the Romanian Cultural Institute in Tel Aviv, Tiberiu Soare will take part in the event as a professor and will work with the students undergoing the program. Tiberiu Soare will also conduct the gala concert on July 27 at the Elma Arts Complex in Zichron Yaakov. Tiberiu Soare spoke to us about these activities.

You are taking part in the International Opera Festival and Masterclass organized by the Mayor of Jerusalem, first of all as a professor.

What do you intend to focus on during this period?

Of course, as it's a mastersclass focused on opera interpretation, the first thing I'm interested in is identifying and capitalizing upon the data and potential that each student has. The meetings are individual and we start by working on a certain excerpt from an opera from either the classical, romantic or modern repertoire and from then on we - the student and I - try to identify any problems or development opportunities of the interpretation, from a vocal technique standpoint, from a musicality standpoint etc. We try to touch on all the issues that can be solved in a meeting between students and someone who has a little bit more experience than they do.

How will the masterclass on July 23 go?

The consultations are meant to develop the abilities and possibilities of each student individually. I haven't been told anything specific about the meeting on July 23, but it will probably be something on a larger scale, a rather developed lecture in front of several students, like a conference where I can tell them what usually happens when you really want to interpret opera music in the classical, romantic or modern repertoire. Apart from the masterclass on the 23rd - which, I have to say, is supported generously by the Romanian Cultural Institute in Tel Aviv - there will also be a gala concert, because here these activities have been going on more or less at the same time - there were meetings with students and there were also preparations for two titles (La Traviata by Giuseppe Verdi and Don Giovanni by Wolfgang Amadeus Mozart) and there was also a competition that only ended two evenings ago. The winners, the finalists of the competition, are the protagonists of a musical evening alongside a local orchestra from Jerusalem and I was invited to conduct this gala concert on July 27. In other words, I will also be working directly with the students involved in this concert, with the finalists, and we will be able to put to practice all the things we went over, together with an orchestra.

Do you already know the program for July 27?

It's mostly finalized. It features works from the romantic repertoire, from operas by Verdi, as well as from works by Giacomo Puccini, Mozart, Donizetti and Vincenzo Bellini, works that are part of the standard repertoire of a young opera singer. In the short breaks we had between the classes, I spoke to my fellow professors - who also come from the United States, the European Countries, the Russian Federation - and we came to the conclusion that we are following the same objective, which is to develop their potential as much as possible. It's very true that the masterclass takes place over three weeks, but even so - believe me, it's a very short time frame - but we try to give the maximum information in the minimum time available. The program was commonly agreed upon with the organizers of the masterclass and, of course, the structure of the orchestra was also taken into consideration. We don't have a very extended structure and that is why the repertoire had to be chosen with relative care. We still have to figure out some details regarding certain titles, but mostly it seems that the gala concert will feature famous arias and excerpts from romantic and classical operas.