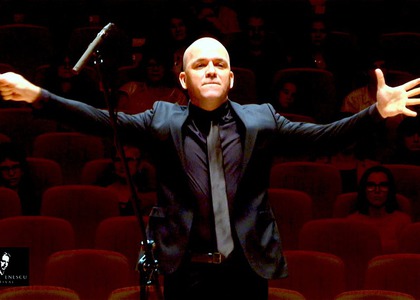 The statement of conductor Cristian Lupeş

Let me tell you why the tour is named 100 X Enescu... it might be a bit misunderstood because this year marks the centenary of the union of Romania. First of all, we had the simple math in mind; we wanted to cover ten concerts with a group of ten artists - a conductor, eight soloists and one art director. Therefore, 10 X 10 equals 100.

Another aspect of this figure - one hundred - is that one hundred years ago, Enescu had already introduced the concept of The National Prize for Composition, which literally created a school, a system that went on to become a school of composition. The first composers to receive the prize headed to Europe, as Enescu had hoped they would, to study and master European musical styles and grammars, and eventually became the teachers of our teachers. Therefore, we decided to recreate the idea and the path of Enescu - a young Enescu, who thought of us - and to celebrate, actually to wish the Romanian musical nation that the next hundred years be full of successful and inspired compositions and composers to support us in our emotional and spiritual growth.

At the concert, we will perform music by Enescu and Bela Bartok. We will start with The Romanian Dances suite, performed by my stage mates, the eight soloists. They are very inspired and it is always a pleasure for me to listen to them before the concert. Next - Five of Millenium - a history of music in five minutes, composed by Liviu Dănceanu. We will finish with our version of Enescu's Octet, Op. 7 - a beloved piece, which we perform in a certain way, always telling the audience to expect a play with 12 abstract characters, but the 12 characters are interpreted by 8 actors (in our case, the soloists). This exuberant drama conceals the technical difficulty of the piece.