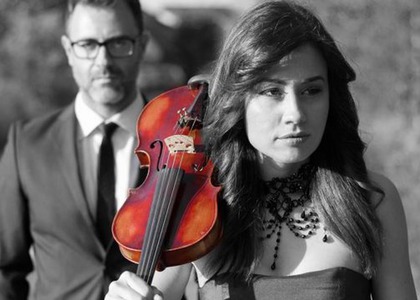 Mr. Ștefan Doniga, you have just finished your National Tour "A century of Romanian music" with violinist Diana Jipa, where you presented works by Romanian composers exclusively. How do you feel about following this artistic and managerial endeavour? How was Romanian music received in the cities you visited?

Romanian music was received with a lot of enthusiasm, especially considering that we have chosen very accessible works, for the general public. This tour was aimed primarily at pupils and students - we performed more than half of the concerts in music high schools. Therefore, the program was carefully chosen in order to reach a broad audience. Naturally, the audience responded enthusiastically to such music. We were very well received and as a result, in fact, we wish to continue doing many more tours of this kind.

You and Diana Jipa are preparing for a new tour promoting the "Dinu Lipatti - composer" record, a project which implied research, transcriptions, a more complex activity than making an ordinary record. What exactly convinced you to pursue this path, involving Dinu Lipatti's composition?

First of all, our fascination with Dinu Lipatti's brilliance. Dinu Lipatti's brilliance is a complex one, it is not only his tremendous talent as a performer. It was doubled by a great, great composer, a great creator who I've only just begun to discover. By coming into contact with several of his works, I understood this and realized that it is worth researching, simply digging into music sheets, joining those who continually discover new compositions in Dinu Lipatti's repertoire, in order to bring them to light, to give them to the audience. The whole endeavour is also worth it because many of the works we performed and included on this album have been put on disc for the first time - they have never been recorded before. Furthermore, seeing that it is a record also dedicated to the presence of the violin - with Diana Jipa, as you mentioned, performing together with me on this record - we sought to adapt several of the works for this chamber duo of piano and violin.

Who do you want Lipatti's music to reach through this record?

This record will be distributed free in 500 copies in music schools, libraries, traditional art schools, community centres and cultural centres in Romania. Therefore, we mainly wish this music to reach young people, children, those who are pursuing education in the field of music. It is very important, from our point of view, for everyone to know that a Romanian composer reached this extraordinarily high level of creation and artistic refinement. And he can become a model, we think, for everyone who is pursuing this path. However, of course it is a product aimed at all music lovers; it will be available for free download on the Internet.

Interview by Monica Isacescu
Translated by Mădălina Grosoiu, An I, MTTLC
Return to archived Interviews