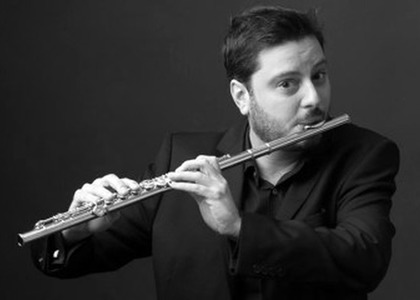 Tomorrow, October 30, 2018, starting from 19.00, the Romanian Rhapsody tour will come to an end at the National Cotroceni Museum in Bucharest. Flutist Matei Ioachimescu, one of the protagonists, draws some conclusions at the end of the project.

The Romanian Rhapsody tour is already close to its end. First of all, tell us how was the collaboration with pianist Mara Dobrescu?

Collaborating with pianist Mara Dobrescu is an honour for any musician. She is one of those artists dedicated to the piano, not only as a soloist, but also as a chamber musician and accompanying musician, with incredible finesse and astounding sensibility. It's an honour, a privilege for any musician to collaborate with pianists of such calibre. We have already done some concerts together, not including the debut concert at Santa Cecilia in Rome. We were in Cluj, at the great festival Musical Autumn in Cluj, a resounding success. It looks like the audience in Romania has accepted the challenge of an exclusively Romanian programme, performed by Romanians who live abroad and come to present Romanian music in its universality rather than as a project, let's say, specifically dedicated to the 100th Anniversary of the Great Union or that has any other national connotation. The audience had an extraordinary response to a programme that was put together very well. After that, we went to Oradea - same result. Here is a small city, where people come and listen to Romanian music. Then there's Deva, Bistrița… We also had a rather amusing incident, a small misunderstanding with the opening hours made us have one audience at 18.00 and another one at 19.00, so we performed the programme again at 19.00, which was something new, it had never happened to me before. At any rate, the audience has an absolutely marvellous response to the programme we offer them. We are preparing to finish the tour on October 30 at the Cotroceni National Museum. Unfortunately for those who haven't managed to book a place, all the tickets have been sold out. We will be performing with a full house. We are extremely happy and proud of the way things turned out and with the fact that an exclusively Romanian programme is such a big success in Romania.

There were also discussions and masterclasses, from what we could read in the descriptions of the recitals.

Of course. On the one hand, there were some preparatory discussions, especially since we both are advocates of contemporary music. Apart from the contemporary music festivals, we always want to bring the audience close to the music "of the moment", and so we have included two contemporary Romanian works, one written by the great composer Doina Rotaru, and the other by young Cristian Lolea - works that, we think, when accompanied by certain explanations, are very successful with the audience. The audience everywhere, not only in Romania, is caught in the trap of hundreds of years of harmony and it's somewhat difficult for them to understand, to relate to the music of the moment, especially when it comes to new effects, sounds etc. Once explained, the audience not only understands, but knows how to feel and actually wishes to experience new emotions: on the one hand, these open discussions, on the other hand - these workshops and masterclasses. Mara and I wanted so much to re-establish contact with young pianists and flutists in the country. There was already a masterclass in Bistrița. Before that, there were masterclasses in Deva, Cluj and Bucharest. It was a contact with young musicians, in the hopes of motivating and offering them the chance to be in contact with first-calibre musicians. We hope it inspires and motivates them in the future.