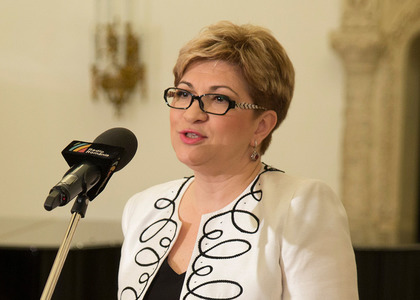 Tomorrow at 7:00 p.m. Radio România Muzical will broadcast live the Radio România 90 years anniversary concert, featuring the National Radio Orchestra under conductor Cristian Mandeal's baton. In the first part, violinist Liviu Prunaru will be performing as a soloist, and in the second part, the Children's Choir and the Academic Radio Choir will perform Carmina Burana by Carl Orff. These are just some of the artists featured in this program. In addition, during the concert break, there will be an album release. We will be discussing all of this with Liliana Staicu, managing director of the Radio Orchestras and Choirs, but also the Radio România Muzical chief executive. Good morning, Liliana!

Good morning! Indeed, tomorrow evening we will be hosting a special concert at Sala Radio, celebrating 90 years of Radio România.

The National Orchestra is also celebrating 90 years… since the first Mihail Jora concert.

Yes, the National Orchestra turns 90 this year. As a matter of fact, Mihai Jora was the one to lay the Orchestra's foundation in 1928. Even though the first concert - which took place a couple of years later - marked the official beginning, the actual start of the Orchestra was in 1928 with the studio recordings for the radio.

And of course, I assume that there was no Mihail Jora Studios, but rather a really small room, something more like a living room, am I right?

More of a living room, that's true, but a very relevant fact is that Radio România -which was known as Radiodifuziunea Română - was one of the first European radio stations back in 1928. So we thought that this anniversary deserves a special celebration and therefore we decided to organize a special concert that would bring the Radio's musical ensembles together on stage. As you've already mentioned, there are three: the National Orchestra, the Academic Choir and the Children's Choir. Our special guest, Liviu Prunaru, who is one of the most renowned figures in the musical scene, will be performing in the first part. He serves as the concertmaster for the Royal Concertgebouw Orchestra, which is a highly appraised orchestra from Amsterdam. He will be playing some famous miniatures, among which Thais de Jules Massenet's Meditation, on his famous Stradivarius violin, made in 1694.

And what can you tell us about the rest of the repertoire?

Beside Massenet's Meditation - which is clearly a hit in the classical genre and a very popular piece in general, whether the listener is a classical music connoisseur or not - Liviu Prunaru will be performing Gabriel Fauré's Après un rêve and Wieniawski's Polonaise in A Major in the second part of the concert.

A little bird has told us that this concert is going to have a few surprises...

Oh yes, we are talking about a great classical hit, a piece that manages to draw the audience's attention every time it is performed. This is also the case now, as the concert tickets are already sold-out. Lucky for us, but not for the other people that would've liked to come, there are no tickets left. But as you've already said, those who want to listen to the concert can do so by listening to the live broadcast on Radio România Muzical. I truly believe that the soloists interpreting Carl Orff's Carmina Burana will be a pleasant surprise for the audience. We are talking about the soprano Diana Țugui, the tenor Ștefan von Korch and the baritone Balla Sandor, all of whom will be performing under the baton of conductor Cristian Mandeal. Also featured at the beginning of the concert will be a piece by Adrian Pop titled Ethos I.

We've heard that during the concert break there will also be the Radio România 90 album, released under the Casa Radio publishing house.

Yes, the album release will take place at the Sala Radio lobby. Radio Romania 90 - recordings from Radio Romania's musical library is Casa Radio's way of celebrating the anniversary. On the album there are pieces interpreted by brilliant Romanian musicians of both older and newer generations, such as the soprano Arta Florescu, the tenor Valentin Teodorian, the violinist Alexandru Tomescu and some of the conductors that succeeded them decades later on the Radio Romania Orchestra's podium: Iosif Conta, Emanuel Elenescu, Carol Litvin and Tiberiu Soare. I must add that this double album is a Radio Romania Muzical initiative.

Let's remind the listeners the fact that my colleague here, Andreea Chiselev, will also be a part of this launch…

Yes, she will. She's also the one who designed the double CD's booklet which is already available at the Casa Radio bookshop, on 31 Temișana Street.

But also at the project's partners: the Humanitas and Cărturești publishing houses.

Of course. It can also be ordered online. It is our pleasure to offer our audience and to the people who want to listen to the album from home some of the Radio'sGolden Library recordings. In this way we are celebrating an anniversary that is an important event for us and, presumably, an important event for our listeners who have been supporting us every day. It is a great achievement for us to have reached 90 years of Radio Romania. It is such a beautiful number and we get to celebrate it in 2018, which is also the year of the Romanian Centenary.

Therefore, we hope people will join us. The album release will also be broadcast live on Radio România Muzical, and I invite people to join us tomorrow and listen to the concert and the CD release.